Articulated buses have arrived in Cincinnati and will be used along Metro’s highest capacity corridors to add capacity and improve productivity. Each of the five new articulated buses has a capacity in excess of 100 people (62 seated, 50+ standing) which represents a 50 percent increase over normal bus capacity.

“The articulated buses are workhorses. They will allow us to carry more customers per bus and increase the efficiency on routes that are frequently crowded,” said Marilyn Shazor, Metro’s CEO. “This is especially important now as we try to stretch every dollar to serve as many customers as possible with a smaller budget.” 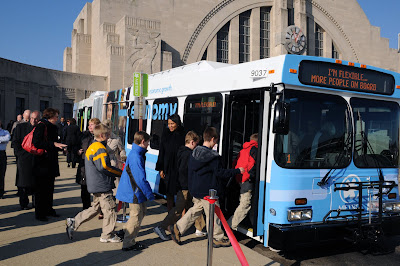 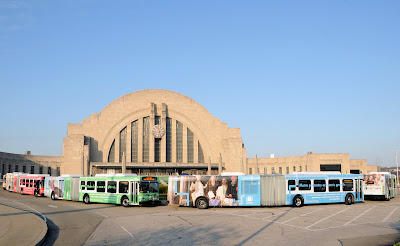 Each of the new buses cost just over $611,000 and were paid for primarily with federal Congestion Mitigation/Air Quality (CMAQ) funds that were made available through the Ohio Department of Transportation and the OKI Regional Council of Governments.

The new 24-ton articulated buses are being deployed along Metro’s heavily used 43, 45, and 47 bus routes along the Reading Road corridor, and are replacing existing buses that were beyond their useful life according to Metro officials.

Financially these buses represent a potential gain for Metro through the additional capacity added while maintaining the same labor costs with only one bus driver. Future articulated buses are being investigated and might even be hybrid like many of Metro’s newer buses.