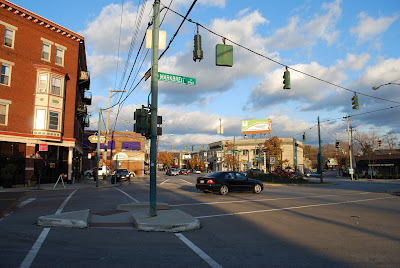 The City of Cincinnati will begin work on Madison Road from Ridge Avenue to Oakley Square’s eastern edge at Allston Street (map) this February. The work, valued at $5.76 million, will be performed by Adleta Construction and last through November 2010.

Just over $4 million will come from Cincinnati Water Works for the installation of new water mains according to Cincinnati Department of Transportation & Engineering (DOTE) officials. Concurrently, another $1.54 million will be invested by the City for additional infrastructure improvements to the stretch of roadway.

“The project improves the geometrics of the intersection of Madison Road and Ridge Avenue to allow all vehicular turning movements to maneuver safely and decrease accidents,” said DOTE Senior Engineer Danny Jones who also stated that the project is in coordination with the Kennedy Connector plan.

The City will also make streetscaping improvements in the Oakley Business District that will include the following in addition to new sidewalks, walls and steps under the railroad overpass on Madison Road.

During construction City officials state that one lane of traffic will remain open in each direction along Madison Road, but encourage drivers to use extra caution and reduced speeds through the area.