Many people are aware of the dramatic cuts taking place at Ohio’s local transit authorities, but at the same time Ohio’s intercity public transportation modes – bus carriers, Amtrak, and airlines – are also seeing sharp service declines. According to All Aboard Ohio, these decreases in service are leaving many Ohioans stranded as they look for travel connections between Ohio’s many cities, towns, suburbs, and rural hamlets.

“Ohio is facing a serious mobility crisis,” said Bill Hutchison, president of All Aboard Ohio. “Ohio’s public officials and transportation company executives need to recognize a problem exists and start working together to address the lack of travel options.” 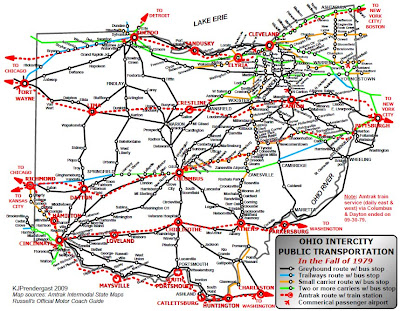 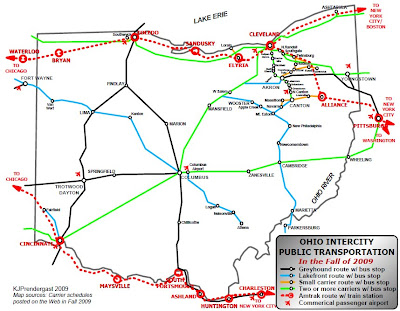 The news comes out the non-profit’s new Transportation Report Card (pdf) in which the organization gave Ohio a “lump of coal” for the declining transportation choices. In the report, the following data illustrates that decline over the past 30 years.

According to All Aboard Ohio, these cuts have an especially negative impact on Ohio’s growing elderly population, disabled citizens, and lower- and working-class families who can not afford to own their own or reliably maintain their own car.

“Given the sorry state of intercity public transportation in Ohio, it’s probably better that you travel to grandma’s house this holiday season because it’s more difficult for her to visit you,” said Hutchison.

The U.S. Census Bureau estimates that Ohio residents over the age of 65 currently make up 16 percent of the state’s population – a number expected to grow to 20 percent by 2030. It is also estimated that in Ohio’s larger urban areas like Cincinnati and Cleveland, roughly 20 to 25 percent of the households have no car at all.

“While one can attribute this decline in transportation options to many factors, I believe it’s mostly due to complacency. Too many just blandly plod along and accept their fate without a fight. Well, we don’t accept it and this report is an early salvo in our fight.”