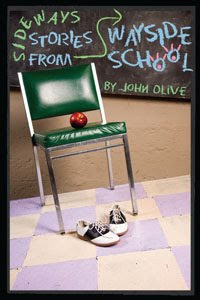 If you’re looking for a theater performance that DOESN’T involve Christmas this December, you’ll want to beat feet down to the Know Theater and check out their latest production, “Sideways Stories From Wayside School.” This play chronicles the misadventures of the students at an elementary school that is most definitely “above average.” Instead of building 30 classrooms all in a row, the architect got a little confused and stacked all the classrooms on top of each other… and this is probably the most normal thing about Wayside School!

The show, based on the books by Lewis Sachar (author of Holes), is delightfully silly and challenges the audience to forget the outside world and be drawn in to the crazy goings on in the classroom – be it Mrs. Gorf (AUGHHHH!!), the meanest teacher in the world who turns her students into apples, a classroom band with fantastical instruments, or watching one of the students face an epic struggle with pigtail pulling.

Director Jason Ballweber has managed to bring a fantastical, magical story to life in a very low-tech way. Lots of crazy things happen at Wayside School, and instead of employing elaborate pulleys, bells and whistles, or smoke and mirrors, the show employs two actor/stage hands, dressed all in black with black hoods over their faces, that act as on-stage props. They make apples float through the air, write on chalkboards, and are an essential part of making the magic happen on stage. This technique hails from Japanese theater and is called “Kabuki.”

The cast of adult-children and their teacher counterparts keep the pace of the show at a breakneck but manageable speed, and have everyone in the audience chuckling with glee at their absurd antics. Memorable roles include Catherine Prevett as the gap-toothed, energetic Rondi and Liz Vosmeier as the new, lovable teacher who comes in to replace Mrs. Gorf.

I loved reading the Wayside School series as a child, and was delighted with how true the entire performance stayed to the original books. If you’ve read the books, you understand that they are filled with enough material to write at least 3 plays. John Olive, who authored the play, has translated a classic kid’s tale into an evening of fun.

The Know Theatre is known for doing plays and musicals that push the envelope with their content, be it risque, taboo, existential, or just plain weird. Wayside School definitely pushes the envelope as well. It is unabashedly, pointedly, exuberantly… fun. This show accurately captures that memory of what it is like to be 9 years old: innocent, curious, creative, and ridiculous. There were all ages and types of people at the preview show I attended last week. The thing I noticed was that EVERY single person in the audience had a smile on their face nearly the entire time. Everyone, from the grandma and her grand-daughter, to the trio of hipster college kids sitting behind me, thoroughly enjoyed themselves.

I think you will too.

Sideways Stories from Wayside School is at the Know Theatre through December 26th. Performances are 8pm Fridays and Saturdays with a 3pm Sunday matinee. Tickets are $12 with reservations. The Know Theatre is located at 120 Jackson Street (map) in Over-the-Rhine’s Gateway Quarter. Call (513) 300-5669 for reservations or order your tickets online.