This past Wednesday night, dozens of transit supporters gathered for the Cincinnatians for Progress (CFP) holiday party and victory celebration at City Cellars downtown. The meeting came just over a month after Issue 9, the Anti-Passenger Rail Amendment, was soundly defeated by Cincinnatians at the polls. In the campaign, CFP out-raised, out-canvassed, and outsmarted the special interest groups looking to hold back our city.

At the meeting, rail advocate John Schneider discussed the status of the Cincinnati Streetcar plan and other transit projects regionally and nationally. Cincinnati is getting closer to making its Streetcar plan a reality, with the possibility of receiving funding from several state and federal sources. Any one of these awards could fully fund the project; and depending on the amount, later phases of the plan could even be fast-tracked. 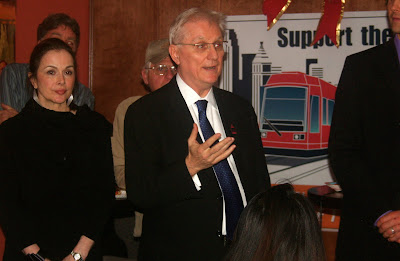 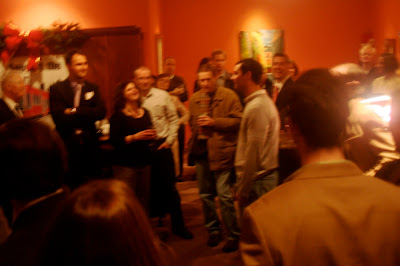 The 3C Corridor project, which would give Cincinnatians a rail link to Columbus and Cleveland, was also discussed. Schneider said Ohio is in a position to receive federal funding, depending on what strategy is used to develop our national inter-city rail infrastructure. That’s because Ohio is the most dense U.S. state without rail linking its major cities.

As the special interest group known as COAST ducks away and tries to regroup after being blasted in the November 3rd election, transit supporters continue to rally and maintain a strong and loyal base of supporters that are indicative of the larger voter population in Cincinnati.

Formed in response to Issue 9, Cincinnatians for Progress grew quickly and gained true grassroots support. Chairs Joe Sprengard and Bobby Maly explained that thanks to this support, the organization will continue to exist as a pro-growth, pro-transit group supporting our city and urban core.

If you are looking to help make the Cincinnati Streetcar reality you can do so by doing one or more of the following: