With the new members of City Council now sworn in, the debate surrounding the City’s annual budget has once again gotten heated. Much of the debate this year swirls around layoffs instead of city services like in past years. More specifically the debate is over who should be laid off.

A significant change took place on November 3rd, when Charlie Winburn (R) made his way onto City Council in place of Greg Harris (D). The change represents a shift in power when it comes to the budget discussions which previously had a 5-4 majority in favor of cutting some of the public safety budget which, instead of being trimmed in past years, has actually grown.

In the past I asked the question as to whether we actually know how many police officers we need in order to maintain a safe city, or if anybody actually knew the answer to that question. The natural answer always seems to be add more police officers and continue to increase their budget, but common thought should be examined when we are discussing people’s jobs and livelihoods.

I am of the mindset that much more than shear force is responsible for public safety. After school programs, mentoring, crime prevention initiatives, and job programs are all proven tactics that can be used in maintaining public safety. With that said, a good way to measure quantifiables is to compare yourself to peer cities.

After some research it turns out that while Cincinnati lost 8 percent of its population from 1990 to 2010, the City has actually grown its police force by 21 percent over that same time. If you factor in the proposed police force reduction that number would change from a 21 percent increase to a 9 percent increase, and once again, while our population declined 8 percent.

When looking at how this compares with our peer cities, Cincinnati ranks at the very top of the list of police officers per 100,000 residents even with the proposed police force reduction. 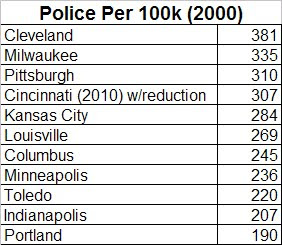 It can be easy to say lets not ever cut our public safety spending, as it is the most core function of government, but as people’s jobs and livelihoods are on the line we owe it to them to at least examine the situation from an objective standpoint and make the best decision for the residents of Cincinnati.

There are also good programs at risk during these budget discussions. It would not only be unfortunate, but also irresponsible, to cut spending on the City’s recycling program that would reduce costs and actually grow revenues. It would be similarly irresponsible to cut spending on the Comprehensive Plan, Climate Protection Action Plan, or any other initiative that is laying the groundwork for economic development that grows revenues and reduces expenses.