The news is out that the Atlanta-based Carter/Dawson development team has selected Birmingham-based Brasfield & Gorrie, LLC as the general contractor for the private development portions of The Banks. The Carter/Dawson team stated in a press release that Brasfield & Gorrie is “one of the largest privately-held contracting firms in the nation, and brings their extensive successful experience in building complex, mixed-use, vertically integrated developments in dense urban areas.”

This may be all well and good but the issue I have is that they’re based out of Birmingham. It’s not that there is anything wrong with Birmingham, or Atlanta for that matter, but there are huge sums of public money going into The Banks development. These tax dollars should be spent in the taxpayer’s best interest, and with unemployment hovering around 10 percent, we should be demanding that these contracts be awarded to local companies who will be employing Cincinnatians.

It’s much like the rationale behind shopping local. When you award contracts to local companies they’ll hire people in the region, those people will take that money and upkeep their homes, go shopping, eat out, and support the local economy. When we give these contracts away to someone else there goes much of that money.

I can’t say for sure whether Brasfield & Gorrie is the best firm for the job, because they very well might be, but I do know that there are qualified companies here locally that would have loved the opportunity to not only get this contract, but also make a lasting impact on the city they call home. The one bright spot is that Brasfield & Gorrie has committed to achieving the development team’s goal of at least 30 percent SBE participation, and committed to utilizing a “significant amount of local talent to get the job done efficiently and effectively.” 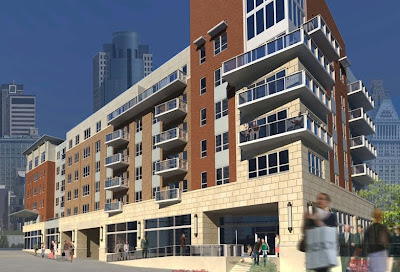 Phase 1A of The Banks development – rendering provided.

Brasfield & Gorrie is expected to start assembling their team on site almost immediately and will begin construction on the overbuild of Phase 1A in December with a set completion date of Spring 2011. Once complete, The Banks will represent a total private investment around $600 million. Paul Brown Stadium, Great American Ball Park, the National Underground Railroad Freedom Center, Riverfront Transit Center are all complete and part of Cincinnati’s Riverfront Master Plan developed by Urban Design Associates. The Central Riverfront Park is under construction now and will compliment the entire development.