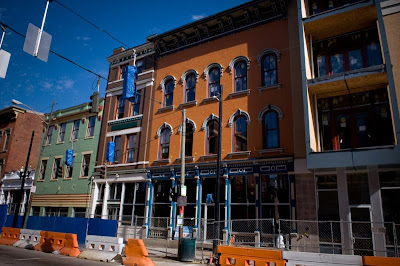 The newest phase of the Gateway Quarter redevelopment has been under construction since the beginning of this year, and 9 months later the Trinity Flats building is well on its way to looking absolutely fabulous.

Trinity Flats will consist of 25 residential units and 7,500 square feet of store front street level retail space. The project, located at Vine and Mercer Streets (map) in Over the Rhine, is slated to cost around $8.9 million.

One aspect of this project which makes it stand out from the rest of the Quarter is that Trinity Flats is a clever mix of adaptive reuse and new construction. The Model Group is doing a fantastic job of highlighting the original building’s historic features while simultaneously adding a progressive new structure to the mix. The new construction building adds a modern update to classical building elements such as window detailing, but manages to keep a clean aesthetic overall. According to the building elevations (credit Building Cincinnati) the new construction project will include a community rooftop deck. This will provide a definite draw to those wanting to move into the city but who are not completely wanting to give up their outdoor space.

The commercial space in the infill building will be the new home of the Gateway Quarter leasing office, opening up the corner of Vine and 12th streets to new endeavors. Model Group has an estimated completion date of April 2010 for the Trinity Flats development. 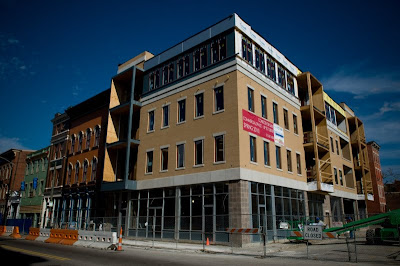