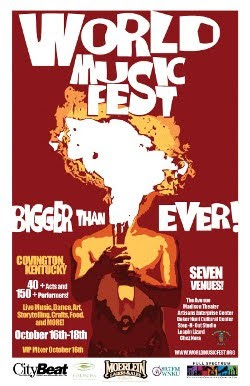 There’s something happening on the south side of downtown Cincinnati this weekend that is worth some attention as the World Music Fest runs all weekend at multiple venues through the heart of Covington. This event is part of the Covington Full Spectrum series which has something artsy going each and every weekend through the entire month of October.

This is the third annual World Music Fest, and while you may be saying “I’ve never heard of a World Music Fest in the Cincinnati area”, that’s probably because it’s never been as ambitious and as large as it is going to be this year. In prior years there was just a single concert in Newport but this year there will be more than 40 performances at seven different venues around Covington over the course of the entire weekend.

We have linked the entire schedule for you here, but wanted to take the time to point out a few highlights of the weekend:

Nearly everything throughout the weekend is free admission aside from a the few events that we’ve outlined here so be curious and get out to see some great music from all around the world in your own backyard. In the meantime you’ll be supporting some great businesses in Covington that have decided to take part World Music Fest 2009.