Canada’s Great Lake Swimmers, singer-songwriter Will Hoge, and alt-country legends, Cracker all graced Louisville’s stage last month with the Ohio River as its backdrop. While the tunes were great and ran for four hours (starting at 6pm) this post is not a concert review by any stretch. This my friends is more of an open letter to you, the UrbanCincy reader, to get a discussion going around why Louisville can pull something like this off while we here in Cincy get cover band after cover band on our waterfront on Wednesday nights. 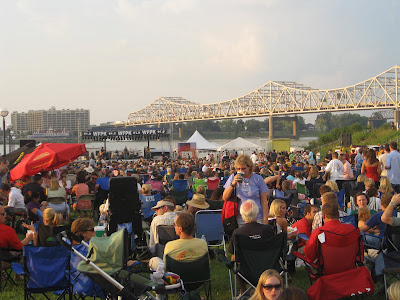 This is my biggest beef these days with our town and something I’d love to change, but the task sometimes seems so great that it is not worth tackling. Then I look closer (like I know most of us do, and we challenge our friends to do so too) and I see that things are starting to really cook! Midpoint is quickly approaching with a lot of great bands with bands from our same zip code, as well as bands from as far away as Paris, France. That group also did a great job lining up bands through the summer on Fountain Square, but I have to say that all of that seems to be the polar opposite of “name that cover band.” I think there is a middle ground, and I think Louisville has found it.

Louisville is doing a lot of things right with their concert series and they are bringing a good amount of people into town for it. Their mix of artists on any given Waterfront Wednesday is very diverse and don’t necessarily cross over, but people come for one and stay for all three. Will Great Lake Swimmers open for an entire tour for Cracker? Heck no, but for a night it seems to work! Oh, and because it’s free, people bring other people along with them. I have noticed in my two trips there this summer that most of the people that show up fall more under the “curious observer” label than “diehard fan”. People bring their kids along and there are people around that would be eligible for the Golden Buckeye if only they lived in Ohio. It’s a wonderful and diverse combination of music lovers that come to enjoy their evening. Outside. For free. Along the river. Shocking, I know. 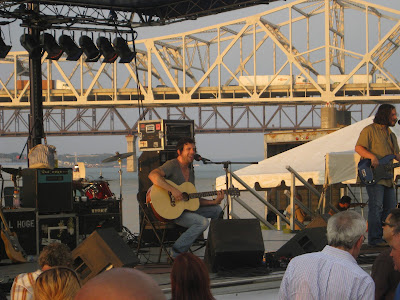 So, to you the reader of UrbanCincy, I ask this… why not us? And just as (if not more) important, how can we do something like this? I have asked this question of people around town in conversations over the last six weeks and have received many different answers. Louisville has about 1.2M people in the metro area and we have 2.1M people, so you can’t say they have a wider base from which to draw. We both have universities and we are both river towns. Provide your rationale and provide your solutions in your comments, and if you are willing to try to find a way to make it happen say that too.

For those curious, the September 30 show headliner is BellX1 with supporting acts to be announced. I have to say, the drive is pretty easy and for what you get, it’s well worth the trip.