Representatives from the Ohio’s Department of Transportation traveled to City Hall last week to host an open forum discussing and explaining the 3C passenger rail project to Cincinnatians. This proposal will connect Cincinnati to Dayton, Columbus and Cleveland via passenger rail, and a group of about 30 people gathered at City Hall to get more information on the upcoming project and voice their opinions on the project and how it will affect Cincinnati.

The 3C representatives went through a detailed presentation outlining the plan that will be submitted to the American Recovery & Reinvestment Act for funding. If funding is approved for this project, there will be a preliminary “Quick Start” phase to get the rail up and running as quickly as possible. In this first phase it will take approximately 6.5 hours to ride the train from Cincinnati to Cleveland, with the trains reaching speeds of up to 79 miles per hour. 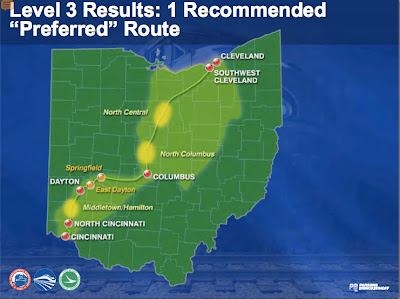 The eventual goal is to develop high-speed rail in Ohio, with trains traveling up to 110 miles per hour, and eventually connecting into the larger Midwest regional rail plan often referred to as the Chicago Hub. At these speeds the travel time from Cincinnati to Cleveland will be reduced to approximately 3.5 hours. Future hubs will create more stops than the six that are currently proposed. The current recommended route that will be submitted with the proposal includes hubs in Cleveland proper, south Cleveland, Columbus, Dayton, north Cincinnati, and Cincinnati proper.

So how does this affect Cincinnati? Having reliable passenger rail connecting the public throughout the state of Ohio is fantastic. Of course, high-speed rail is the preferable (and eventual) goal, but one has to wonder how effective taking “baby steps” towards rail will be as opposed to tackling high-speed rail in one fell swoop.

The biggest concern at the meeting was the location of the train station that would service the greater Cincinnati area. The research group initially picked three locations to focus on: the Queensgate area, an area near Riverside Drive/the Boathouse/Sawyer Point, or a station located farther east, near Lunken Airport. All three of these options naturally have their drawbacks. The Queensgate area already deals with large amounts of freight traffic, and the concern was that there would be too much congestion in the area to make that stop feasible. 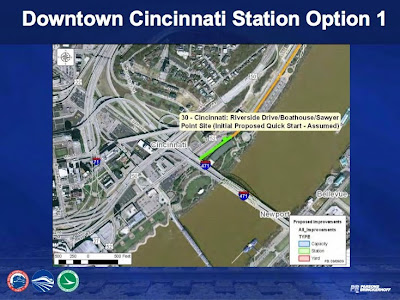 The proposed “Option one” (Riverside Drive) area was the station that caused the most concern and alarm among residents who were in attendance at the meeting. Denise Driehaus, a state representative who hails from the West Side, voiced her concern that locating the station on the far southeast side of the City would set up obstacles for citizens traveling from the west side. It is also less advantageous from a retail and tourism perspective, as newcomers to the Cincinnati will be dropped off on the east side rather than more towards the city center.

There were several East End citizen groups who were concerned about the Option One site for different reasons. Over the course of several years, citizen groups and people from the area have worked hard to create a “Riverfront Renaissance” consisting of the network of parks and housing in that particular area. These citizens are concerned that a new diesel train station would disturb the views and tear down the aforementioned parks. All of these proposed stations are, as of now, only temporary locations. As the Riverfront Renaissance spokesman stated, “temporary’ is measured in decades in Cincinnati.” 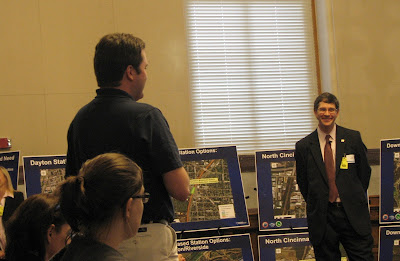 As of the meeting, the ODOT representatives stated that they had not come to a conclusion on which Cincinnati site they would choose to include in the October 2nd proposal. However, Jason from Somewhere Over-the-Rhine cites an article from the Enquirer stating that the backlash from this open forum meeting prompted officials to choose the Lunken Airport site as opposed to the eastern riverfront area.

There are obvious drawbacks to this site as well, the most obvious being its distance from the Cincinnati’s center city and its attractions and accommodations for business and leisure travelers alike. There is also the issue of being so far away from the existing Amtrak service that connects Cincinnati with Indianapolis and Chicago to the west, and Washington D.C. to the east – both of which run out of Cincinnati’s Union Terminal in Queensgate.

What are your thoughts?