In the past I have said that the new office space is a plus for the downtown office market even if it filled up by shuffling existing office tenants around. The thought process was that some local companies would be able to upgrade their office space for a comparable price due to the additional supply in the market. The space left behind by those companies would then potentially be filled by a company looking to locate in the center city market, but previously could not afford to do so, or find enough contiguous space to fit their needs.

What makes Bolton’s editorial piece interesting is that he used it as an opportunity to throw down a challenge for Eagle Realty and other businesses who might be considering filling up the remaining 20 percent of office space inside the tower.

“I have a challenge to Western & Southern Financial Group CEO John Barrett, who marvelously brought to fruition at the end of last year a 20-year vision for the block at Sycamore and Third streets. The challenge extends to any other company located downtown considering moving to the remaining seven floors and 175,000 square feet of space available in what will be the city’s tallest building: Don’t do it.”

Bolton goes on to discuss the importance and opportunity of landing an out-of-market company for the remaining space, or bring a “marque” suburban company into the downtown market.

I was left thinking about something else during a recent conversation on the topic. Is the Queen City Square development a project meant to boost Cincinnati’s good ol’ boy network? Consider the following.

The Western & Southern-controlled Eagle Realty, who is developing Queen City Square, has had some recent troubles with other development projects – most notably the prominent Fifth & Race lot which has since had development rights taken from Eagle and transferred to Towne Properties. 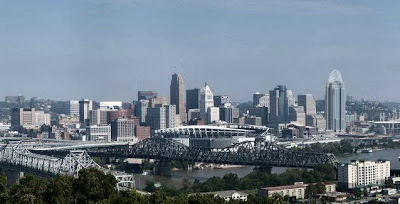 Queen City Square is a marque project that will add instant starpower to Eagle Realty in future deals. The two-phase mega project needed to be successful though, so insert the rest of the good ol’ boy network in Cincinnati. In rolls IFS Financial Services and Fort Washington Investment Advisors (both entities of W&S), Great American Insurance, and Frost Brown Todd.

So far everyone involved in this development project has come out smelling like roses. The architect, developer, financiers and tenants all included. But what is being done in and of itself is not immediately productive for the downtown office market. That success will come when those vacated spaces left behind by these already existing downtown companies are filled; and that work will be done by the owners of those other buildings.

What will probably happen is that these vacated spaces will fill up with a plethora of small tenants looking to take advantage of the low price points, therefore creating less fanfare than a large single entity moving into Cincinnati and downtown. It is unfortunate, but true, and the Cincinnati business community needs to step up their game and take Bolton’s challenge.

Queen City Square presented Cincinnati’s best opportunity in many years to land a new corporate tenant or headquarters for downtown with its high-quality finishes, large contiguous space and prominent location on the city’s skyline. This will be virtually impossible to do with the older spaces that are now available – opportunity lost.