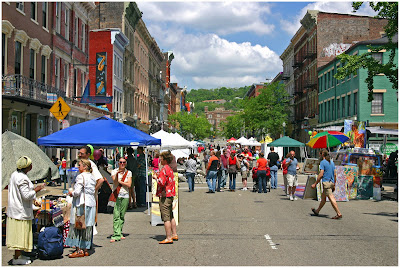 This Sunday is the third of five Second Sunday on Main celebrations in historic Over-the-Rhine. In addition to the regular mix of live music (list below), food, local vendors and art, this month’s event will also feature a high-heels drag race which will start at 4pm.

There will also be a cooking demonstration by Chef Nat Blanford, from Iron Horse Inn, at Falling Wall located at 1419 Main Street at 2:30pm.This month’s Global Groove theme is intended to celebrate many of the local cultures that make Cincinnati special.

The event is free and open to the public and runs from 12pm to 5pm between 13th and Liberty streets along Main Street.