The Cincinnati region’s primary transit operator, Metro, is citing that due to the ongoing recession and a drop in city tax revenue that less service is in the cards. Metro says that they are “bracing for extremely difficult decisions in the coming months,” and that they are working with several different entities analyzing options to remedy the situation.

This funding problem is one not unique to Cincinnati’s Metro as many major transit agencies across the nation are currently considering service reductions, fare increases or both to help address their budget deficits.

View United States of Transit Cutbacks in a larger map

Loss of funding:
Nearly half of Metro’s $94.6 million operating budget comes from the allocated 3/10 of 1 percent of the city of Cincinnati’s earnings tax. This earnings tax is projected to be some $2 million to $3 million less than originally anticipated. “The exact decrease is not yet known, but Metro is working with the City on alternatives,” says Metro who anticipates a $2 million to $3 million funding reduction by 2010.

Another problem is that fare revenues are projected to be some $3 million to $5 million less than anticipated. These losses are attributed to the nearly 10 percent unemployment rate (fewer workers = fewer commutes) and recent actions by Cincinnati City Council that limited revenue growth by $600,000.

What to do:
So far Metro has already done a number of things to help reduce costs including the restriction of non-essential travel; shortened call center hours; reduced printing transfers, system maps, bus schedules, brochures and newsletters; increased fares and pass prices; and even reduced service 3 percent in March and May.

But what else can be done that would preserve the service of essentially the sole transit system in a metropolitan region of 2 million plus people? 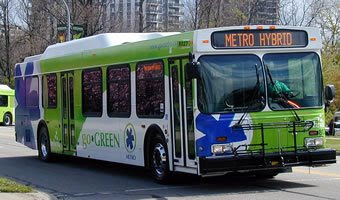 One of Metro’s diesel-electric hybrid buses – image from Metro

Metro is additionally challenged as the vast majority of its funding comes from one entity even though they serve a much larger area. A new regional transit authority was pitched by former councilman John Cranley as he was leaving office, and approved last October, but not much has happened since.

A regional funding structure would not only diversify Metro’s funding sources, but it would also create a shared funding responsibility amongst the communities served by Metro. At the same time a regional transit board should be created that would operate one single transit authority (including Nky). This would reduce overhead costs and make for a more streamlined authority that could experience economies of scale within the workplace. This structure would also result in a comprehensive system that could be managed at a regional level instead of pieced together at a more micro level.