Of the 50 most populous regions of the US, Cincinnati has the 15th MOST jobs postings per capita. That is to say that finding a job in Cincinnati would be easier than finding one in places from Pittsburgh to Portland , San Diego to San Antonio, St. Louis to St. Paul, and New Orleans to New York.

The map below graphically displays how well Cincy is doing. In addition to Cincinnati having the 15th best standing nationwide, it also boasts the 2nd best standing in the Midwest region. As a result of its high ranking Cincinnati also ranks ahead of many of its peer cities that it is in direct competition with for job talent. Cities like Denver, Seattle, Charlotte, Baltimore and Milwaukee did all rank higher.

In the interactive version clicking on a city will bring up job postings, and drawing a box will zoom to that area. Not currently looking for a job? Then pass this link along to someone who might be. 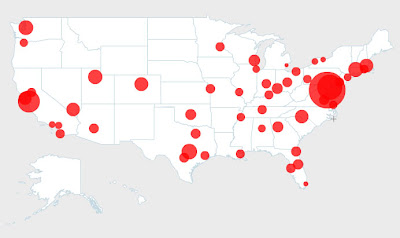