The announcement was made at the new Rookwood Pottery headquarters in historic Over-the-Rhine. The location is at what will be the northern end of the Downtown/OTR circulator which will then head Uptown from there. Rookwood Pottery is an “enthusiastic” supporter of the Cincinnati Streetcar project and was more than happy to welcome the couple hundred people that showed up to hear the news. 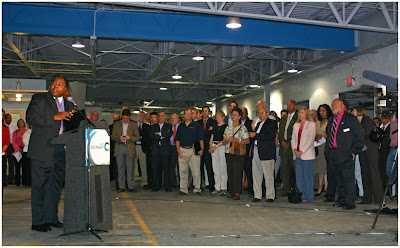 City Manager Dohoney with some of the crowd on hand

The excitement was notable as Mayor Mallory and City Manager Dohoney arrived. The crowd was buzzing in anticipation of what was to be announced. This excitement continued as a large group of attendees walked over to Market Wines at Findlay Market to continue the conversation.

Development Team:
Cincinnati Streetcar Development Partners is made up of 12 companies that each specialize in a different aspect that will help lead to the successful implementation of the streetcar system. The team is made up of local and non-local companies that have been involved with roughly 80% of all recent streetcar and light rail projects in the United States, including projects in San Francisco, New York City, Atlanta, Portland, Seattle and Cleveland.

Members of the team have also been involved with local projects like Great American Ballpark, the National Underground Railroad Freedom Center and the restructuring of Fort Washington Way that came in on time and under budget. 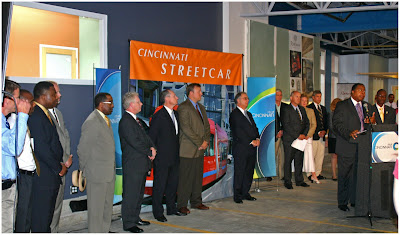 One of the companies is Stacy and Witbeck Inc. (SWI) who is considered to be the “premier streetcar and passenger transit rail construction company in the United States.” Their involvement in the Cincinnati Streetcar project will be their first in the Midwest. As a result, SWI will be opening a new office downtown and will be relocating their executives to Cincinnati specifically for this project.

The team will also consist of local companies like Jostin Concrete Construction, DNK Architects, Megan Construction Company, Property Advisors, Wordsworth Communications and G.J. Berding Inc. The Cincinnati Streetcar Development Partners will be led by Parsons Brinckerhoff, Inc. (PB) who will also serve as the project manager. PB has led several local transit projects in the past and has a sterling record.

Funding:
The City currently has $78 million in requests to the federal government, who City Manager Dohoney says will be absolutely necessary in the implementation of the Cincinnati Streetcar system.

This revised funding strategy is a response to the national economic downturn say City officials. The City has also established a new and more comprehensive website for the Cincinnati Streetcar that also includes an online location where streetcar supporters can make private contributions to the project.

What’s Next:
The selection of the team that will design, build and operate the Cincinnati Streetcar system is a major step forward for the project.

“The leaders of this city are taking this city’s future seriously,” says program manager Fred Craig who continues, “we are seeing a new generation working to make Cincinnati a better place.”

Craig went on to say that he and the development team welcome community input and emphasized that this is a project that should be driven by the community. Craig went as far as to say that if you have any suggestions regarding the project that you should call him personally and let him know (513-639-2100 – still trying to track down direct phone line). 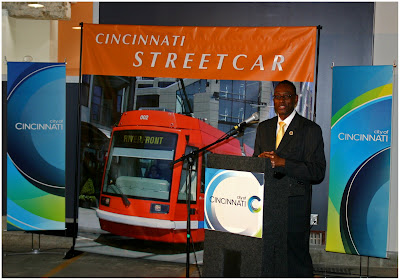