I’m sure you’ve heard this term thrown out there before. It seems as though any time a project is proposed, that a certain constituency doesn’t like, they simply throw out the descriptive word “boondoggle” of said project and poof – it must be true.

After all, the stadiums were boondoggles. So was the convention center expansion, the 2002 Metro Moves plan, the National Underground Railroad Freedom Center, the Fountain Square renovation and now of course so is the proposed Cincinnati Streetcar. 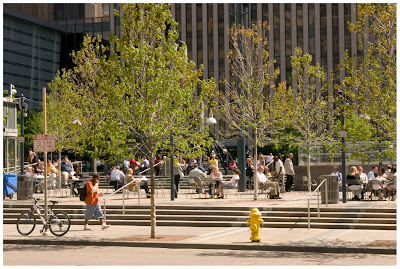 Technically speaking a boondoggle is “an unnecessary or wasteful project or activity.” More informally speaking, Wikipedia cites that the term first made its appearance in the 1930’s during the projects of the New Deal. A New York Times report, at the time, reported that over $3 million was spent on teaching the jobless how to make boon doggles.

What I wonder is whether the term has lost its value? Can we apply this term and rallying cry to projects preemptively? If so, how does it differ from someone else’s opinion that the project may be a roaring success?

While in some instances the proclamation of a particular project being a boondoggle may have been valid, there are just as many opposite examples. One of the most recent examples is the renovation of Fountain Square*.

Many of the opponents, to the project, saw it as being destined to failure. That the new design would be worse than the previous one, that the new management would be damaging to activity on the Square and that the private investments wouldn’t occur around the Square. These opponents have been wrong on all accounts, but are still claiming every new idea to be a boondoggle without any real accountability.

In the case of the Cincinnati Streetcar, opponents use boondoggle in combination with “trolley” and/or “choo choo train” in virtually everything they write on the topic. Words are a powerful thing and language is often manipulated to advance one’s interests on an issue. This is fine, but the distinction should be made…and the problem is that these techniques/strategies come at the expense of the center city, Cincinnati politicians, local government and the mentalities of all Cincinnatians.

Just because someone somewhere cites that a project is one of those dreaded boondoggles does not make it so. Do some research and learn about the topic on your own free of bias, then make up your own opinion. The Cincinnati Streetcar has had several studies done on it…and the results are in. Economics, the environment, transportation and livability issues are all on the project’s side. Don’t take my word for it though…read for yourself and make up your own mind.

All of these studies find the streetcar project to be a positive project for the city/region in regards to their specific interests. The studies are all specific to the Cincinnati region. All documents are in PDF form.

*NOTE: Fountain Square has seen the recent activity of the following businesses that have cited the renovation of Fountain Square as being instrumental to their operations…Chipotle, Potbelly, McCormick & Schmick’s, Boi Na Braza, Via Vite, Tazza Mia, Ingredients, Joseph A. Bank, Graeter’s, Morton’s the Steakhouse, 5/3 Banking Center, Jones the Florist, Cadillac Ranch, Oceanaire, Bootsy’s and Nada…just to name a few.