In September of 2007, Mayor Mallory pushed for the creation of an Environmental Quality Department. This department would oversee the City’s efforts to reduce carbon emissions and hopefully bring Cincinnati in alignment with goals set forth by the Kyoto Protocol set globally in 1992 (183 parties have ratified the Protocol as of 2008).

The Climate Protection Action Plan (CPAP) is the primary document and driving force behind Cincinnati’s localized efforts to reduce Greenhouse Gas (GHG) emissions. The plan has short, medium, and long term Greenhouse Gas reduction goals which average out to an annual GHG reduction of 2%.

Within the CPAP there are 5 identified categories that include more than 80 Emission Reduction Measures. One of these measures – eating less meat – has gotten significant coverage over the past 24-36 hours and has caused quite a stir.

The idea is that people try to go one day a week without eating meat. It’s not a mandate or policy, just a suggestion. The response though has been chaotic and emotionally charged with comments filled with anger and misunderstanding. 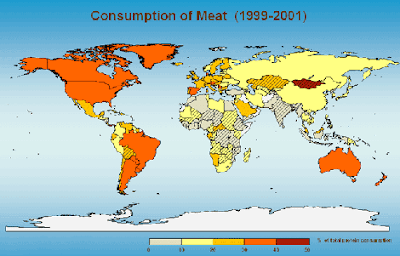 Summary of specific issues – A 2006 report by the United Nations‘ Food and Agriculture Organization (FAO), Livestock’s Long Shadow, found that the production of animals for food is responsible for over 18% of the planet‘s greenhouse gas emissions. This is more than twice that of the office buildings and homes (8%) and nearly 40% more than transportation emissions (13%). This figure represents 9% of the planetary carbon dioxide emissions, 37% of the methane (mostly from livestock flatulence and waste matter) and 65% of the nitrous oxide; the latter two gases having 23 times and 296 times the global warming potentials of CO2.

The report concluded ―The livestock sector emerges as one of the… most significant contributors to the most serious environmental problems, at every scale from local to global and finds it must become a major policy focus.

A 2005 University of Chicago report, Diet, Energy and Global Warming (597kb pdf) found that the added burden of meat diets above plant based diets accounts for 6% of US total greenhouse gas emissions. The Standard American Diet (SAD), of which around 28% of the caloric intake is derived from meat, produced 1.485 metric tons CO2 equivalent emissions (per person per year) more than an all plant based diet (a conservative figure). A red meat eater‘s mean diet increased this number to 2.52 tons CO2e. This is the equivalent difference between driving a sedan (Camry) and an SUV. A diet of just 20% meat produced an added GHG burden of 1 ton CO2e per person annually; this is the difference between a year of driving a standard sedan (Camry) and the highest efficiency hybrid (Prius).

With 80% of annual world deforestation connected to animal agriculture, an area the size of a football field is razed every second, a practice which has been termed ―”the ‘hamburgerization’ of our forests.” A single SAD meal levels 55 square feet of rain forest.