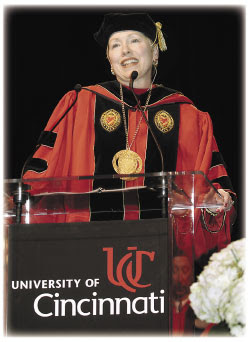 As I am completing the final year of my five-year program I feel compelled to write a little bit on my thoughts about the only University of Cincinnati President I’ve known. Dr. Nancy Zimpher came to UC shortly before I started my academic career there and a lot has changed since then.

The once “out of control” budget has been tamed and is on its way to be balanced. UC is no longer joked about as standing for Under Construction. Academics have improved across the board with higher enrollment standards, reformed programs, and increased achievement. The university is emerging as a major research institution as the amount of research funding continues to rise annually.

The University has embarked on its most ambitious fund-raising campaign ever, rivaling some of the most ambitious campaigns run anywhere. UC is no longer considered a one sport school as our baseball, volleyball, soccer, football, and basketball programs are all competing at the highest level in the Big East Conference.

More students are living on and around campus – shedding the long thought idea that UC is a commuter school. Dr. Zimpher helped lead the effort to freeze tuition at State universities, she has been a proponent for the proposed streetcar system, and she has worked tirelessly to make the Uptown neighborhoods surrounding the university better places to live, work, and play.

Dr. Zimpher pushed for a strategic academic plan that put students at the center of it all. UC|21 has done just that as more students are getting involved, letting their voices be heard, and shaping the way their university does business.

Dr. Zimpher has gone out of her way to make it known that academics come first, no matter what, when she is in charge. The Board of Trustees have some hard work ahead of them to fill the void she’ll leave behind, but thanks to her, UC is now on the map and should be a prime destination for another top-level talent like herself.

Thanks for everything you’ve done for our region’s largest employer, university and city. Thanks for making my five years at the University of Cincinnati great, and good luck with your new endeavor as Chancellor of the State University of New York.