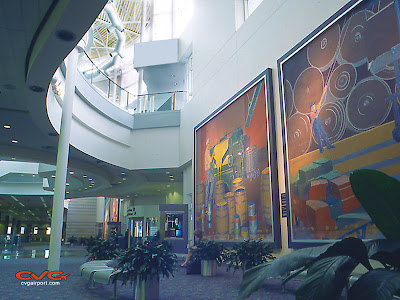 The Cincinnati/Northern Kentucky International Airport, CVG, is in a transition period. The airport has been known for its sky-high fares and single airline dominance (Delta) for some time. At the same time CVG has brought new companies, people, and bolstered the region’s corporate presence since its start in 1947.

The airport itself has completed a third north/south runway and an extension of the primary east/west runway within the past decade (Runway Project Map). More recent work has been on the development of a new transportation center, for buses, on the east side of Terminal 3. These improvements have increased capacity and efficiency of the airport in a way that positions CVG well for future success.

The problem though is the state of the airline industry. Fuel prices are going up, as are the costs associated with security measures. CVG in particular has been hit even harder by the several nearby competing airports (Louisville, Dayton, Columbus, Indianapolis) that often offer cheaper flights with less hassle. So what’s an airport to do?

Well CVG has started to aggressively pursure several new airlines, as well as, looking for existing juggernaught Delta to increase its operations here as operating costs out of Atlanta look to be rising. The news is that in addition to Delta, low-cost carrierAirTran may be in the mix to fill the low-cost void at CVG.

UrbanCincy has also been informed that a brand new airline is looking into offering non-stop flights, from CVG, to several business/travel destinations. Preliminary plans call for this service to start prior to this upcoming Summer season (more information coming soon).

So what does all of this mean for CVG and Cincinnati area air travelers? Increased competition, especially from low-cost carriers, may result in lower fares from the primary controlling force at the airport – Delta. Lower costs at CVG may be bad news then for Dayton’s airport that currently capitalizes off of CVG’s failures. Thus illustrating the tricky business of airline travel, and highlighting the paradigm that when you solve one problem, you create another.