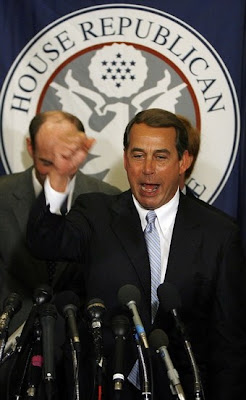 Many Americans believe strongly that the infrastructure spending plan should look beyond widening our highways and building new roads. According to a recent study (pdf), 80% of Americans believe it’s more important that a stimulus plan include efforts to repair existing highways and build public transit rather than build new highways. 45% of those polled go on to say that construction of new highways should “definitely” or “probably” not be included in the plan.

The American public has seen the days of highway spending dominate their lives. As a result we are damaging our environment, limiting our transportation choices, and negatively impacting our health. It appears as though House Minority Leader and Republican from West Chester Township, doesn’t agree.

It is a real shame that when Americans are standing up and proclaiming that they want a change in the way we allocate our transportation resources we also have politicians who are standing up for the status quo. Boehner needs to quit worrying that his constituency feels negatively towards comprehensive transportation – because they don’t.

Over the past decade or so I-75 through Butler County has been widened, Union Centre Boulevard interchange built, SR 129 (Michael A. Fox Highway) built, and the new Liberty Interchange is under construction. Over that same period the City of Hamilton has seen their bus service disappear, rates have gone up on Metro express routes, and the Ohio Hub Plan is looking for some federal money to get going. It should also be noted that Boehner was one of the few opposing votes to a measure supporting increased funds for Amtrak service in Ohio (even Steve Chabot supported it).

With all this highway spending does America or Boehner’s district (map) really need additional highway capacity and more highways? Mr. Boehner (contact info) should be supporting democracy and freedom for Americans. We are strangled by an automobile oriented society that leaves no other choices for most Americans. Democracy, freedom, and choice would all seem to be things Boehner would support; so why doesn’t he?