Our region is starting to make strides towards improving our environmental impact and ultimately reducing our carbon footprint. In some cases though enough is not being done. One in particular is recycling.

The City of Cincinnati recycles about 9% of its trash with goals of increasing that to 15% in four years. To meet this goal the Mayor launched a Green Cincinnati Recycling Plan that introduced four new Downtown recycling drop-off locations (GoogleMap), a new webpage where citizens can sign up for recycling on-line, and a recycling program at tailgating before Bengals home games.

In addition to these great efforts lets have dual recycling/trash receptacles out on the streets. One of the good things about not having a presorted recycling facility is that the public doesn’t have to worry about sorting their recyclable materials when discarding. A secondary receptacle adjacent to the trash can would work quite well and offer the easy access to recycling as you’re walking down the street.

A more expensive option would be to go the Big Belly routewith not only trash, but recycling as well. In this scenario users would do a simple presort between cans/bottles and paper products. These are a more expensive and comprehensive approach, but probably one of the best options to take in the money is there. 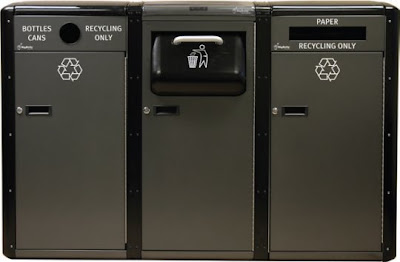 Another important step will be to get rid of those tiny 18-gallon recycling bins and replace them with larger 64 or 96 gallon recycling carts comparable to their trash counterparts. I was recently encouraged to hear that this is indeed in the process and might be implemented with a RecycleBank system where recycling amounts are tracked and users are rewarded for their participation.

The larger bins though would be a huge improvement on their own as people would have the psychological incentive to fill up their much larger bin, instead of the dis-incentive to stop filling up their overflowing smaller bin.

The issue of recycling will be touched on again as it relates to the region’s colleges and universities at a later time. But feel free to post any of your ideas for how the region can improve its recycling rates.