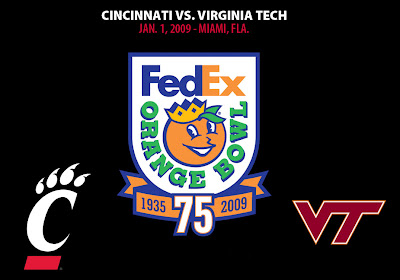 The University of Cincinnati is reporting that about 4,500 tickets remain for Bearcat fans at the Orange Bowl. The University was originally given 17,500 tickets and are on the hook for selling those tickets. Should they not sell them, then the University is responsible for covering those remaining tickets. What happens many times is those left over tickets are given to a local charity of some sort.

At this point though the tickets have been on sale for just over 1 week and around 13,000 already have been sold. There are another couple weeks until the game itself so it looks pretty good that the UC allotment of tickets will be sold by the time the game rolls around – something that many people thought wouldn’t be possible.

Tickets are $125 and hotels are going for around $120/night in the downtown Miami area where most people are staying. If you want to stay on South Beach or in the Miami Beach area then hotel rates are going to be much higher. It is about a 17 hour drive (6.5 from Cincinnati to Atlanta, 10.5 from Atlanta to Miami) from Cincinnati to Miami with gas averaging about $1.70 a gallon.

You can find ticket information and everything else you need to know from match up information to bowl game merchandise at Bearcat Bowl Central. I’ll be joining at least one other blogger for the Orange Bowl madness. Who else is planning on making the trip?