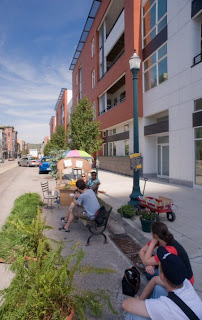 First organized by the Trust for Public Land, PARK(ing) Day is a global event that lasts only one day but whose goal is one that is shared amongst many. Whereas some cities devote 70% of their public land to the automobile, PARK(ing) Day attempts to reclaim land from the automobile, to change how one perceives public space to be defined as, at least temporarily.

Activists, artists and ordinary citizens come together to transform metered parking spots into “PARK(ing) spaces,” or what are essentially public parks. Some of these reclaimed spaces are more elaborate than others, with some laying out the sod and lawn chairs to give the appearance of an actual park. An act of civil disobedience in some locales, nothing more than a glance-over by the parking maids in others.

What’s great about PARK(ing) Day is its simplicity. You choose a suitable location for the park, lay down some sod or shrubbery, add in some chairs or perhaps a bench, and other decorative elements that invite passerby’s to come in and chat. Perhaps add in an umbrella to provide some shade. Oh, and don’t forget to feed the meter. 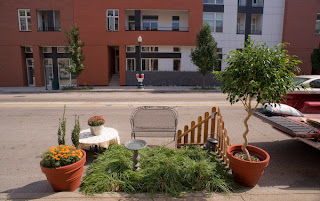 At Coffee Emporium’s spot, one of the employees had kicked back in a chair and was catching up on a novel. At Park+Vine’s, they were selling lemons for two cents and advice for one cent from a cardboard stand that was reminiscent of Lucy’s “Pyschiatric Help” booth from the cartoon strip, Peanuts.

It wasn’t all rosy, though. An impromptu spot along Walnut Street between Fourth and Fifth streets ran into a snafu after participants began playing cornhole outside of a Subway restaurant. The fast-food eatery, fearing a major loss of business during the lunch rush, called the police to complain and the PARK(ing) spot was removed.

PARK(ing) Day was still a fantastic event and a much bigger turnout than from the prior year. It’ll be interesting to see what is planned for next year!