In UrbanCincy’s monthly poll for August 2008 the question was posed: “How have your perceptions of Downtown changed over recent months?” The results were clear and the message is loud and clear that the perception of Downtown is in fact improving. Nearly 350 votes were cast, with roughly 46% of the repsondents selecting the ‘greatly improved’ option. Another 39% said that their perception, of Downtown, was ‘somewhat improved.’ 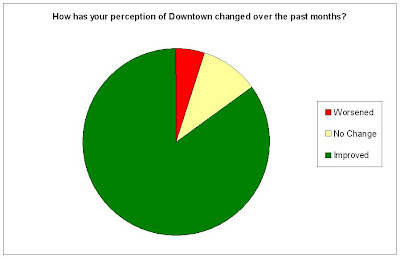 I grouped the 5 selections into 3 categories for this chart

The efforts of political and community leaders have yielded great results thus far. Results that are starting to settle in with people across the region. There are those who still do not recognize the progress that has been made, and this is what DCI’s marketing campaign will need to touch on. Those of us who know Downtown, know that things have improved significantly over the past 5 years. Things look like they are poised to continue to get better, and with time, perceptions will continue to change.