Cincinnatians, like many people in America, are stuck in their cars. We were a nation that developed in a dense, walkable fashion (see East Coast and most Midwestern cities). As the industrial revolution took hold cities increasingly became places synonymous with disease, overcrowding, pollution, and overall poor living conditions. Throw in a few skewed federal policies (The American Dream, Eisenhower Interstate System, Urban Renewal) and you have yourself a rapidly changed nation.

So over the years we have continually built our cities to be more like machines rather than the living/breathing places they ought to be. All of a sudden public right-of-ways were no longer the public domain, but rather the cleared land for fast/efficient vehicular travel. Established neighborhoods made way for new interstates and ‘The American Dream’ of everyone owning their own suburban dwelling, away from the troubles of the inner-city, became firmly implanted in the minds of every American.

In 2000, over 81% of commuters in the Cincinnati region’s 5 largest counties (Hamilton, Butler, Clermont, Warren, Kenton) got to their job by driving alone. Public Transportation accounted for a mere 3.2% which wasn’t much higher than the 2.7% that worked from home. Hamilton County predictably finished as the most diversified county in terms of means of commuting, but even its numbers were nothing to write home about. 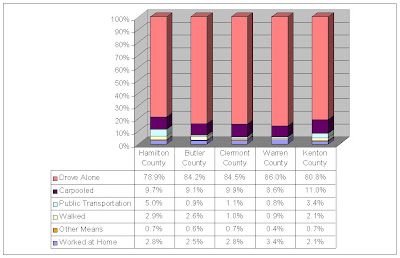 I expect that these numbers will look a little different with the 2010 Census data, but I also don’t expect it to be dramatically different. As oil prices have soared, inner-city school districts improved, crime plummeted, and overall quality of life improved…our public transportation system has lagged behind. Similarly things like carpooling/ridesharing and walking/biking, that can see improved participation through relatively inexpensive measures, have also not seen much change/improvement over the past 8-10 years.

Part of the answer could be the proposed streetcar system, an improved bike/scooter infrastructure, possibly a light rail system, expanded bus service with new/innovative programs (real-time arrival information) that make the system easier to use. All of these must be done and more. Another item that I propose is that businesses/institutions offer financial incentives for their employees to bike/walk, bus (transit), or carpool to work.

This can be done relatively cheaply and could potentially have a major pay off. As we continue to improve our city/region we can not afford to forget about our transportation system and habits. We can only be as strong as our weakest link, and this is an area that has long been ignored.