I would argue that Cincinnati does have a signature tower in Carew, but whether it is a landmark feature is another question. I would say that outside of the world of people who are interested in Cincinnati and/or city history that very few people know the history of the beautiful Art Deco skyscraper. You could also argue that Union Terminal is landmark-esque for Cincinnati, but the same holds true for it with the average joe.

So, does Cincinnati need a new signature tower…well I’ll answer with yet another question. What is the signature tower in Portland, OR…San Diego, CA…Boston, MA…Miami, FL or Washington, DC? Now sure, some of these places have their landmark buildings (most notably DC), but they don’t really have signature towers. What makes Paris, London, Madrid, or Rome so special? They all lack the skyscrapers that are prevalent in American cities, but they have great built environments and pedestrian friendly amenities. 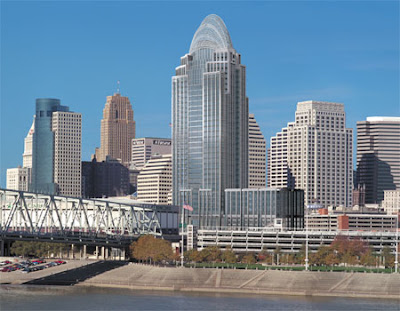 Cincinnati is special in the same way…sure it doesn’t have the skyscrapers like new boomtowns of Atlanta, Miami, Houston, or Dallas. But it has a built environment that those cities will never be able to duplicate. Over-the-Rhine is a landmark for Cincinnati, so is Union Terminal, Carew Tower, Central Trust Tower, Roebling Suspension Bridge, and one could even argue Columbia Tusculum.

Now don’t get me wrong…I’m not opposed to another stylish skyscraper downtown, but I don’t think that Cincinnati needs it by any stretch of the imagination. Often times skyscrapers actually hurt that all important street-life that you hope to create in an urban environment. I say go for it, but don’t go out of your way to accomplish building these skyscrapers. They are pretty…but like a book, the quality of a city should not be judged by its cover.