I can assure you that this will be the last of the Shepard Fairey-related content on UrbanCincy for some time. You went to the opening night party, you read the controversial review, and now you can plot out your mural hunting adventure of Fairey’s murals around town.

Leading up to his first museum retrospective, Fairey installed seven murals around town (2 in Northside, 2 Downtown, 2 in Over-the-Rhine, and 1 in Pendleton) that reflect some of his work that can be seen inside the walls of the Contemporary Arts Center. These murals vary in size, meaning and placement, and until now, those looking to find the murals were largely on a hunt trying to find the mysteriously placed seven murals.

The mural journey is a fun way to spend an afternoon without spending a single cent (transportation costs aside). And while the mural locations may no longer be a mystery, it is still fun to try to find the little messages left behind by the Fairey crew near each of their designated mural locations.

Beyond the murals themselves it is interesting to see how they react with the surrounding urban environment. The E. 14th Street mural is placed next to graffiti in the adjacent alley which presents an interesting dichotomy. The mural on the side of Arnold’s Bar & Grill, on the other hand, peeks around the corner of the alley onto 8th Street as if it’s trying to get your attention and draw you nearer for its message.

Also of interest is how people react to the often provocative murals. Many seem to be going mural hunting and specifically seeking out the art installations, while others are simply passing by and are surprised by the unexpected display. Most stop and pause, others look more closely, but all seem to be interested in the new element interjected into their neighborhood, place of work, or destination. And in the end no matter what you think about Fairey or his work, isn’t this what we look for in art? 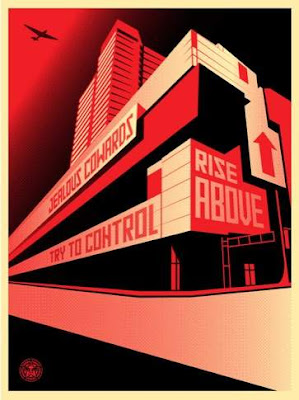 Shepard Fairey has already made an impactful and lasting impression on Cincinnati. Tonight the contemporary artist will be at the Contemporary Arts Center (CAC) for the opening night of his first museum retrospective and will display an “extensive exploration” of his 20-year career.

The retrospective is mounted in two parts – one at the CAC itself, and the other can be seen in several locations around the city in the form of mural projects. The CAC galleries will have around 250 pieces of Fairey’s work displayed ranging from his Andre the Giant piece to his iconic Obama HOPE image. Most notably though Fairey will display his brand new mural custom-made for the CAC’s prominent lobby space.

Fairey has also released an exclusive screen print (right image) of the world famous Zaha Hadid-designed Contemporary Arts Center which has been described as “the most important new building in American since the Cold War” by the New York Times. The limited edition screen print is available for purchase at the CAC. 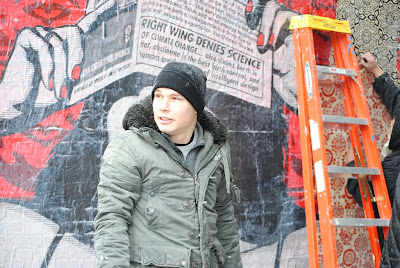 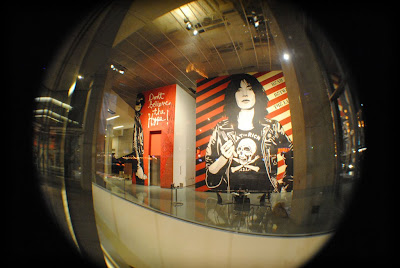 Shepard Fairey works on his mural in downtown Cincinnati [LEFT]. A view inside the CAC’s lobby from the street of Fairey’s new custom-made mural for Cincinnati [RIGHT]. Shepard Fairey photographs by Thadd Fiala.

You may have noticed some scaffolding on the south facing wall of the building that houses the popular Park+Vine store at Central Parkway and Vine Street. It has come to my attention that this scaffolding is there for the prep work that started today.

This prep work is for what will be one of ArtWorks‘ 2009 MuralWorks locations. The popular city-beautification program can be seen all throughout the city (map/images of all MuralWorks projects). This particular mural location will cover up a large blank wall along Central Parkway and become the fourth prominent mural along that stretch of road.

Owner of Park+Vine, Dan Korman, does not yet know what the design will be but he says that he has been hoping for a mural there for some time. “I hope it has bikes,” says Korman who is a prominent local bicycle advocate.

MuralWorks is a program that works with teenage and professional artists as well as community members to create murals, and has the goal of creating these murals in every Cincinnati neighborhood. In 2008, MuralWorks completed nine murals in eight different city neighborhoods.