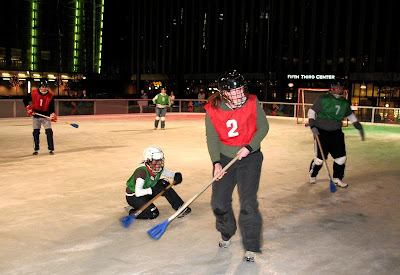 This week marks the return of the broomball season to the Fountain Square Ice Rink. In its fourth annual season the Fountain Square Broomball League has consistently been one of the Square’s more popular activities which is amazing considering it is played in the heart of winter. It’s even more amazing when you stop and consider that players run around on ice in gym shoes wielding broomsticks and chasing after a small blue ball.

Give me a second to try to explain, though of course you’ll do yourself much better by stopping by to catch a game or two. The games that broomball most closely resemble are ice hockey & soccer. Hockey in such a way that there are six players to a side, including a goalie, the players run around with sticks and try to put the ball in the opponent’s net. Soccer in a sense that the players wear “regular” shoes, can kick the ball, and are not allowed using their hands aside from knocking the ball down. Make sense now? Probably not, so stop down and see some broomball action. As a bonus, adult beverages are sold in the heated tent alongside the rink for a very reasonable price.

Aside from the normal UrbanCincy post reminding you about all the great things going on in our fair city, this one has a bit more of a personal touch as Jenny Kessler & I are playing this year. We are members of the Little Kings & Queens of Cincinnati, with our big debut coming tonight! The even better news: we are only a small representation of the local blogging scene on the roster. We also have Brad Thomas from CincyStreetcar Blog, Gordon Bombay from Queen City Discovery, and Soapbox contributor Casey Coston. Our number one fan is 5chw4r7z who has promised to enjoy a cigar under the shadows of the Genius of Water during our games.

While the entire weekday broomball schedule can be found here, The Little Kings schedule is listed below (all games are weather permitting). Of course after the game you can join us at JeanRo for specials on buckets of Little Kings.