Let me stand on my soapbox and loudly proclaim what millions have done before me over the past year and say, “It’s a sign of the times”. Sure, it might not be the most original statement you’ve heard in awhile, but perhaps it truly does apply.

Western Hamilton county is seeing an increase in the reduction of commercial real estate, and yes that’s a borderline double-negative. It seems like everywhere you look, in addition to the depressing little white or yellow slips posted on the front doors or windows of vacant homes, you’re seeing more and more empty retail space.

No, it’s not just the little guy, it’s the big guys too. From the K-Mart in Forest Park, to the Dillard’s in Colerain, and finally to the most peculiar little area, Glenway Crossing in my neck of the woods over here in Western Hills. This once thriving area, while still bustling with activity from the remaining businesses, is starting to become a little, shall we say, ghostly?

Circuit City, CostPlus WorldMarket, and Steve & Barry’s have all gone the way of businesses past. It is understandable that in this and any economy businesses will fold. Circuit City succumbed to the national rivalry with BestBuy, and ironically, the “thrifty” stores like Steve & Barry’s and CostPlus WorldMarket found it difficult to stay financially afloat. Yeah, I’ll give you that WorldMarket was more of a niche store, but they still had everyday items which I only recently discovered before their demise, such as coffee and olive oil which was amazingly priced considering the quality. Oh well, you can’t win them all.

Target took their operations up the road, which seems to be another interesting trend. Despite the vacancies, the real estate in Glenway Crossing doesn’t seem too bad. Businesses like BestBuy, Chipotle, and Panera, as well as WalMart nearby, still draw a lot of people (i.e. money) to the area. Yet new development, including the construction of new buildings, is going on just a few miles up Glenway, where the demographics are really no different. 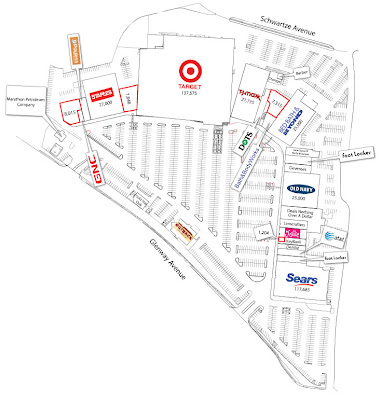 Am I missing something here? No, we’re not building “Legacy Places”, but why build new structures when existing real estate sits not too far away? At least these are being built over the sites of older business and parking lots, etc., but c’mon, would it kill to put something, anything, other than more retail along Glenway?

At any rate, instead of whining about something I really have no control over, I’ve decided that it’s my duty, as a resident of the west side of Cincinnati, to at least contribute ideas of how to utilize this space at Glenway Crossing.

I’ll be honest, the plazas are fairly drab, mostly concrete and mortar, and not overly attractive. So, I’ve come up with the following…

Low Security Jail Space: We keep on hearing about talk about a new jail, why not offer up this space as a small jail facility for the low risk criminals, such as petty thieves, peeping toms, and the Madoff family. I mean, who wouldn’t want a jail in their neighborhood when it’s for the good of the community, right?

Small College Campus: Why between the empty plaza space and the two standalone buildings, formerly known as Target and Circuit City, you could have another concrete University and call it NKU North, or “Northerner Kentucky University”, as some of our friends across the river might say.

Black Friday Training Facility: The FBI has had Hogan’s Alley for years, and the military uses fake cities to teach urban warfare tactics. Why not turn it into a site that department stores can rent for day after thanksgiving training? It would also boost the local economy, as a local “mob” would have to be hired to storm the doors of the trainees. Yep. That’s called thinking outside the box folks.

Before I get hate mail about poking fun at Kentuckians, I should point out that I grew up in Kentucky and spent the majority of my life there. By default, that means I’m privileged to perpetuate the stereotype of the Kentucky hillbilly. I should also point out that I know several people from the west side of Cincinnati who pronounce “wolf” as “woof”.

As stated earlier, this is all a sign of the times. Businesses are bound to fail, while others rebuild. Citizens such as myself will find something else to complain about during the Bengals off season, and satirical posts will rise hand in hand with the unemployment rate.