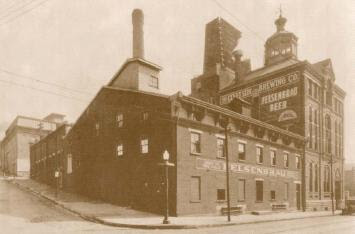 Despite initial reports of the impending demolition of the structure, the western wall at the northeast corner of Stonewall and McMicken, nicknamed “Brewers Blvd” will be rebuilt and saved from the wrecking ball. The building in question is the oldest of seven structures that comprise the Clyffside Brewing complex in the northern section of Over the Rhine’s Brewery District.

In true micro-brewery fashion the two-story brick building, constructed in 1846, brewed only a modest 275 barrels of beer in its first year of operation under its original moniker of George Klotter & Company. Since those days, expansions and ownership changes have seen the buildings produce ales and lagers under the banners of Sohn, Mohawk, the aforementioned Clyffside, and most recently as Red Top Brewing Company, before closing its doors on September 27, 1957, leaving over 150 Cincinnatians jobless.

All is not lost however for Cincinnati’s oldest brewing structure. Owner Duane Donohoo confirms the wall will be rebuilt and the redevelopment plan, which includes condos with terraced, city-view decks and indoor parking, will move forward. When it is all said and done, Donohoo plans to put between $3-$3.5 million in the historic property, and hopes for it to be an anchor of a revitalized Brewery District.

“The whole reason I came to the Brewery District in the first place was to make a difference,” exclaimed Donohoo. “It’s such a gorgeous area and I want to do whatever I can to preserve the history and restore the buildings.”

The Clyffside Brewery redevelopment was first announced in April, 2008 to much fanfare. The building is not only in the historic Brewery District, but it is also at the northern end of the proposed Cincinnati Streetcar line. Once complete, the redeveloped Clyffside Brewery building will house 19 condos ranging from low-100’s to the mid-200’s.

Image of the historic brewery structure circa 1933 provided.