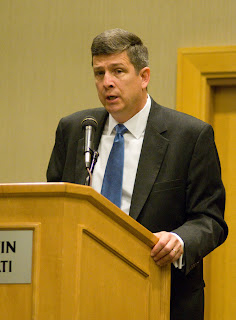 The 2010 Urban and Regional Public Transportation Conference, held May 5 at The Westin Hotel and sponsored by the European-American Chamber of Commerce, featured presentations by over a dozen industry experts including a keynote speech by John D. Porcari, Deputy Secretary of Transportation of the U.S. Department of Transportation.

“America’s rail infrastructure is in shambles”, said Porcari, whose department is shifting policy away from a decades-old process that considered road or rail projects individually but could not easily approve multi-modal projects.

In working to rebuild “the squandered investments of our grandparents”, Porcari described a profound turnaround in federal transportation policy from one that encouraged sprawl to one that will promote walkable smart growth. He promised that America’s new generation of passenger trains will not be assembled here from components manufactured overseas, but rather be “100% American” in order to “capture every piece of the high speed rail value chain”.

Although the announced policy changes portend an increased opportunity for federal assistance for local rail transit projects, Porcari stressed that in the short term those places with their “act together” will be first to benefit from these changes.

Speaking on the matter of the $400 3C’s grant, Matt Dietrich, Executive Director of the Ohio Rail Development Commission, remarked that early in the planning of the 3C’s line, Amtrak offered to sell Ohio a variety of retired and surplus locomotives and passenger cars for $10-$15 million. But after grants were awarded to projects in other regions, that equipment has been directed elsewhere, and Ohio has now budgeted $175 million – almost half of the 3C’s grant – for new passenger trains.

Cleveland’s station will be located on that city’s lakefront, with a convenient connection to its Waterfront light rail line. Both Dayton and Columbus will have stations located in their respective downtowns.

Dietrich also discussed plans for a station at Wright-Patterson Air Force Base, possibly within walking distance of the National Museum of the United States Air Force. The base is the state’s largest single-site employer and the museum is, aside from King’s Island and Cedar Point, the state’s most popular tourist attraction. 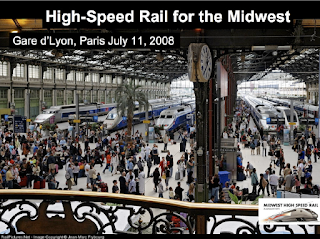 The conference also featured speakers from France, Spain, Germany, and England, each of whom discussed not only the technical aspects of their high speed trains, but also how their networks are funded and administered.

Juergen Wilder, representing industry giant Siemens, described how a ticketing and revenue sharing agreement was achieved with Lufthansa after a high speed rail line extended to Frankfurt’s airport drew significant patronage away from the airline. In the face of competition from passenger rail, Wilder suggested that American carriers might seek similar arrangements or even bid to operate the country’s envisioned high speed rail lines.

Herve Le Caignec, representing SNCF, the company that operates the French TGV network, discussed attempts at private-public partnerships in the construction of new TGV lines. He also offered evidence of the TGV’s staggering success – every day trains seating 750 to 1,100 passengers leave the French capital bound for Lyon and Marseilles every five minutes and do not just sell out individually, but all trains – more than 300 of them — often sell out each weekend as Parisians escape their drizzle and migrate en masse to the Mediterranean coast.