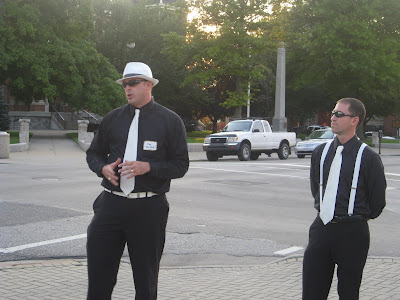 Last August UrbanCincy reported on the Newport Gangster Tours which take people on a walking tour through the heart of Newport sharing stories of the city’s infamous past of gambling, gangsters and girls. The idea sprang up as a way to raise funds for Global Service Learning Inc. and really took hold as the guys landed on an idea that many people gravitated towards. Last fall, the group ran tours every Saturday, and now with the weather changing for the better, they are back for a full season of fun.

Picked by Cincinnati Magazine as the “Best Historic Walking Tour of 2009”, the Newport Gangster Tour will be starting back up on May 1 with two tours each Saturday. The success has extended beyond the tour itself as Newport’s infamous past seems to be catching on as a theme. Late last year the Gangsters Dueling Piano Bar opened on 5th Street. While not officially affiliated with the tour, the new watering hole provides a perfect spot to wrap up the tour and have a few beverages while staying with the gangster theme.

Most of the tours will be on Saturdays, but the group decided to kick off the season in style with a “Gangsters & Grub” night on Thursday, April 29. Two separate tours will go out that night stopping at various restaurants around Newport for a progressive dinner. Group One will depart at 6pm and make stops at York Street Cafe, The Green Derby and Detroit Joe’s. Group Two will depart at 7:30pm and make stops at Pompilio’s, Gangster’s Piano Bar and Mokka. Tickets include the tour, dinner, non-alcoholic beverages, gratuity at each stop, cost $35 per person and can be purchased online. These tickets have nearly sold out already, but event organizers say that there will be a “Haunted Progressive Dinner” in October and possibly more sooner due to the extreme popularity.

Those looking to learn a little bit about the northern side of the river there will be a new tour called Queen City Underground which is scheduled to launch on May 31. The tours will meet on Saturday mornings in the Gateway Quarter and travel through historic Over-the-Rhine for a 90 minute walking tour. Stay tuned to UrbanCincy for more details on the Queen City Underground tours as they develop including a review.