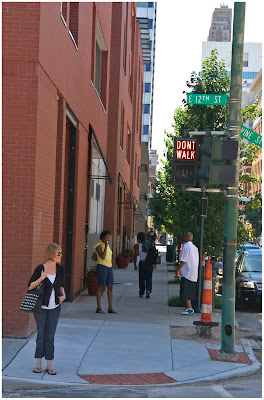 I am a strong, independent woman. I love Cincinnati, and there is nothing that will keep me from experiencing the urban core. However, as a female, there are certain stressors in place that keep me vigilant and watchful… just in case. When I walk alone at night, I take extra precautions to ensure I will be safe and not bothered. I separate my valuables and put them in my pockets instead of my purse. I walk briskly with intention, and am aware of what is going on around me. I slap a serious expression on my face that says “don’t mess with me, man.” And if it’s too far, I drive and park closer, or enlist a male friend to escort me to my destination. For the most part, it seems to work. Am I being too careful? Why do I even bother? Cincinnati is amazing, but it is still not always hospitable for women.

The city as we know it today was not designed for females. Our country was founded by men, and our cities were designed according to their desires and needs. Victorian philosophy dictated that a woman’s place was in the home, not out in the wild world, where bad things can and do occasionally happen. Thus, public spaces were designed with men in mind; men who could deal with the combativeness and friction of the public realm. If a woman were to wander out in public alone, she was harassed – “what’s a nice girl like you doing out here?”

Unfortunately, this still carries through today as I regularly endure catcalls and jeers in public from men of every size and color. Even now, I am one of the only female bloggers writing about urban issues in this region (and on this site – love ya, guys!) It certainly seems to be a man’s world out there. Why is this still acceptable in modern culture? What about the urban setting can be so inhospitable toward women… and what can be done to reverse it?

In Dolores Hayden’s work, Domesticating Urban Space, she examines the separation between public life and private life. In order for a city to be inclusive towards women and families, she explains, the two spheres need to intermingle. When the public life – experiencing the city- feels more like an extension of one’s private living space (safe, hospitable, welcoming, fun), then those who are more vulnerable will be apt to inhabit it.

Local activist and entrepreneur Candace Klein extrapolated along these same lines in her recent editorial which ran in the Enquirer earlier this year. She described her experience of living in Over-the-Rhine for three days without a car, and how it opened her eyes to the community all around her. She is one example of a fearless, independent woman who has figured out how to make the city work to fit her needs. But… does she walk home alone at night? 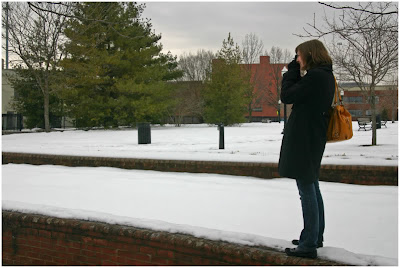 There are both basic and complicated changes that can be implemented in communities to make experiencing them safer and more enjoyable for women and families. One basic necessity is adequate lighting in neighborhoods. Another is simply for there to be enough activity during the evening hours to increase the amount of eyes out on the street. Both of these details were lacking when I was mugged last November. Hayden describes having a system of safe houses or businesses (much like the Safe Place signs back in the 90’s) where anyone could go to if they did feel threatened at all. As neighborhoods become denser and we get to know each other, the cold and faceless city suddenly is colored with life, friends, and a strengthened sense of community.

Hayden writes, “As long as the domestic world remains a romantic haven “outside” of public life and the political economy, politically active women can always be sent back to it, and men can justify the exclusion of women and children from their public debates and analyses… yet… if they (women) can transcend the female world of a segregated place, new kinds of homes and neighborhoods might become the most powerful place in America for progressive political coalitions on urban issues.”

I believe that policy and design has moved forward somewhat since Hayden’s work was written in 1984. Now women make a whole .75 cents on the dollar instead of .50 cents, and gradually more attention is being paid and gender stereotypes are slowing down. They are not gone completely, but things are improving.

One of the greatest indicators of a truly great city is how safe and comfortable the most vulnerable feel interacting in the city. In the case of Copenhagen, Denmark, babies are left in prams outside of shops to get much needed sunlight, and I had no fears traveling on my own from place to place while living there in 2008. I don’t know when that day will come for Cincinnati, but I am looking forward, and doing my part by refusing to give in to fear or intimidation.