I am a recovering vegetarian. That doesn’t mean I’m not proud of the four-years I restrained from meat or that I am unnecessarily self-righteous about it, either. It just means that when it comes to ordering vegetarian food at a restaurant, I know a thing or two about how to do it right.

It also means that I’ve heard every vegetarian joke under the sun. I’m still slapping my knee over the ever sarcastic, “Hey, I think there was bacon in that soup you just ate!” variety. In fact, I’ve heard so many of these quips, I’m completely immune to their underlying maliciousness. To the clever jokesters, to the “I just ate a vegetarian” bumper sticker collectors and to the rest of the haters, this one’s for you. 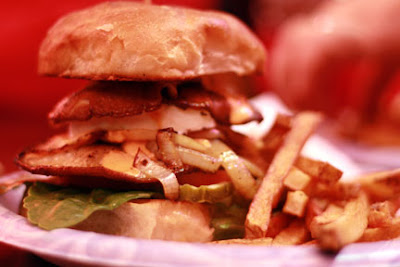 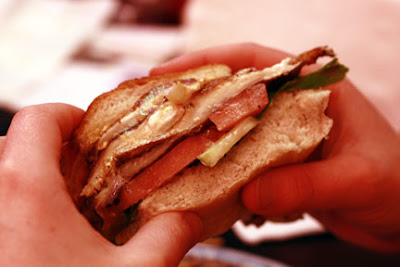 It’s the Terry’s Turf Club shitake burger – a non-meat selection that tastes as good as any meat-centered burger you ever ate. Call for whatever toppings you like and have it capped off with a big, fat wallop of roasted red pepper and goat cheese sauce. I tried to count the layers in it – I think it came to about seven – but the idea is that it’s enormous. It’s the kind of no-nonsense, no-rules attached, go-get-some sweatpants, you’re gonna’ feel it tomorrow sort of burger that will have you clutching your heart for sweet mercy.

And when you get the first creamy, hearty, savory bite in your mouth, you won’t be able to stop until it’s gone. The blend of goat cheese and roasted red pepper in the sauce is genius and the way it slides so effortlessly down the side of the burger is wicked. If you have any wits about you, you’ll have the guys in the back grill your onions so that they become caramelized and sweet. I’m so in love with this thing that the thought of someone talking bad about it sends me into a protective fit – as if my own mother were being insulted.

The concept of Meatless Monday is to skip meat for just one day a week. Will you be able to go to Terry’s and pass up the ground beef burger option in favor of the shitake one? Maybe. Maybe not. The answer to this question relies on a lot of things – your experiences and your feelings about meat in the context of our political, environmental and social climate. Ultimately, whatever you decide is fine – it’s your choice and you should own it. Just don’t say it’s a lack of delicious options that blocked your way.

Say what you will about vegetarians, just don’t say anything bad about this towering, dripping, flavor-packed stack of burger heaven. Cause nobody talks smack about my momma’.

‘Meatless Mondays’ is an ongoing series on UrbanCincy that explores one of the recommendations of Cincinnati’s Climate Protection Action Plan (aka Green Cincinnati Plan) – try to go meatless one day a week. UrbanCincy’s ‘Meatless Mondays’ series is written and photographed by Courtney Tsitouris who is a cook, designer and author of www.epi-ventures.com, a blog about dining in and dining out in Cincinnati.