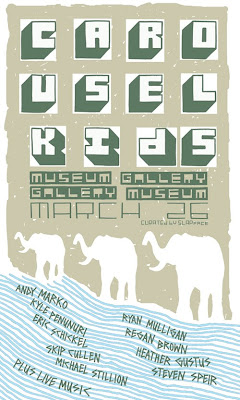 Museum Gallery/Gallery Museum will host its third show, entitled Carousel Kids, in historic Over-the-Rhine Friday, March 26 from 7pm to 11pm after being founded just months ago. The new gallery space in Over-the-Rhine’s art community places the focus of its shows on local talent.

“Museum Gallery is run by six artists working as individual curators,” explained Matt Wiseman. “Our goal is to promote local and up and coming contemporary artists working in all mediums, while creating different experiences among each show.”

The show will feature primarily installation-based work assembled by the artists’ collective SLAPface, and will “explore 1840’s Americana,” that was complete with freak shows and dime museums, and examine this era’s influence on contemporary art display.

“Oddities, the grotesque and the uncanny were once the common spectacles which the circus and carnival revolved around. As a form of mass entertainment, these institutions showcased mysterious and weird creatures, human and animal alike,” described Wiseman. “The popularity of these shows fell into decline in the wake of the ever widening media and modern scientific discovery, only to survive in cult culture. Carousel Kids takes a lighter approach on the notion of modern day anomalies, while staying within the same vein of its predecessors.”

The show opening at Museum Gallery/Gallery Museum (map) includes a reception and is free if you reserve a ticket, and just 75 cents without a ticket. Tickets can be reserved online or by calling (859) 462-3799.