Metro, the non-profit that operates Cincinnati’s bus system, is facing a budget deficit of $16 million in 2010. To preempt this crisis, officials in December elected to reduce service on virtually every route, and eliminate some routes entirely (new schedules). Many Cincinnatians values Metro’s presence because it is a critical service for residents and visitors alike, but some remain hard to convince.

Metro’s important role in Cincinnati goes beyond the obvious. For example, there simply is not enough parking downtown to eliminate bus service. If Cincinnati were to eliminate Metro entirely, the city would need 127 acres of additional parking.

According to Carter Dawson, the group that is managing The Banks development on the riverfront, 85,000 people work in downtown Cincinnati, and according to Metro, 20 percent of them commute using the bus. Therefore, 17,000 people ride to bus downtown to work each day. The amount of space needed for each parking space is estimated at 325 square feet after factoring in space needed for access lanes. As a result, Cincinnati would need to add more than 5.5 million square feet of additional parking space, or about 127 acres. 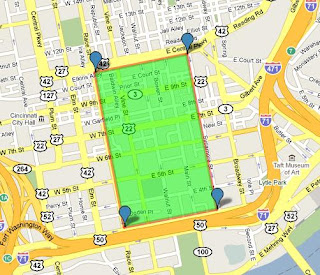 Cincinnati simply cannot afford to throw away 127 acres of prime real estate. Not only does downtown hold some of the region’s most lucrative businesses that would have to go elsewhere, but the tax revenue lost by this displacement would be catastrophic as well. In addition, roadways would need to be expanded to accommodate the increased traffic, stealing even more valuable downtown space. Residents would also be displaced, taking with them the income tax revenue on which the city relies. Cincinnati cannot afford to eliminate Metro. Instead, policymakers ought to be seeking ways to bolster this community asset.