Two years ago Cincinnati City Council member Chris Bortz proposed that the City should more intensely regulate advertising benches seen placed along Cincinnati’s sidewalks. The intent of Bortz’s effort was to clean up the city’s streets by ridding them of these often unsightly bench billboards that bring in around $900 a year per bench.

After Bortz’s proposal took effect the City removed some illegal bench billboards that were not properly permitted and paying the $30/year fee to the City for using the public right-of-way. With more than 1,000 of these benches located across the city there is a huge revenue opportunity being missed.

The problem is that these bench billboards are often not well maintained and create an unappealing aesthetic where they are located. Many of the benches located near bus stops tend to collect trash which then must be managed by the City. When Bortz discussed the issue in 2007 he stated that he would like to see the benches replaced with “rod iron” style benches that would help clean up the appearance around bus stops and the city’s neighborhood business districts. 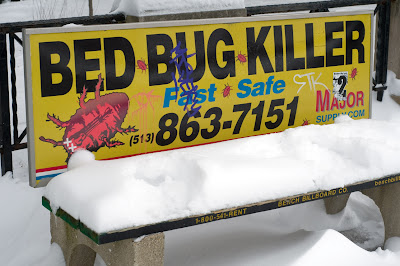 The issue is one that closely aligns with First Amendment rights, but a recent Federal Court decision that found a new right-of-way encroachment ordinance in Covington constitutional gives the issue new life. The court ruled that Covington can regulate items such as advertising benches, vending machines, and newspaper stands to meet certain size and aesthetic standards.

“This is a great step in the right direction that helps the City reduce sign pollution and encroachments in the public right-of-way,” said Covington City Manager Larry Klein. “The ordinance allows the City to continue its beautification efforts, and ensures that the public can traverse City sidewalks safely.”

Local governments can carefully craft content-neutral without the fear of acting unconstitutionally. When doing so the government must regulate in a way that does not involve the suppression of speech and violate the First Amendment. The government must also illustrate that the law serves an important objective (like aesthetics according to the Covington ruling) and is crafted in a way that allows for alternative means of communication.

Cincinnati should regulate bench billboards and other items placed in the public right-of-way more heavily. At the very least the City should charge more for the use of their valuable real estate to capture a greater revenue stream. Policies that move Cincinnati forward in such a direction could steer the way for more aesthetically pleasing benches and newspaper stands, and help accomplish the very things City Council member Bortz outlined in 2007.