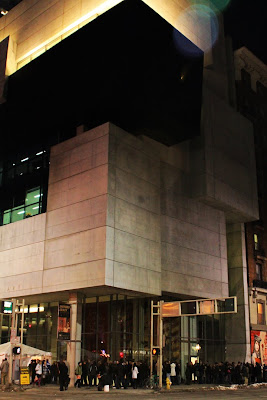 You can be certain that fans of ABC’s Lost will be found in front of their televisions on May 23rd, as the labyrinthine TV fantasy/sci-fi/adventure show wraps up its six-seasons-long narrative. Lost diehards are desperate for a conclusion that will bring closure to and make sense of countless loose ends that have frayed into an ever-more-complex knot of high-minded mysticism and philosophical allusion; anything less than an airtight explanation might suggest that the previous six years of their lives could have been better spent.

Personally, I hope that creators Damon Lindeloff and Carlton Cuse have both the stomach and sense of humor to play a practical joke of epic proportions by tying everything up in a neat little package with a card that reads “It was all a dream.”

Locally, the ongoing Shepard Fairey retrospective at the Contemporary Arts Center has made a splash with its own cocktail of ambitious subtexts, and I had the chance to follow the buzz and visit the show on Sunday of its opening weekend, with free admission offered as part of the Fine Arts Fund Sampler Weekend. I admired the boldness and the commitment of the artist to his purpose, as well as much of his technique, particularly in his large-scale murals: weathered textures and patchwork patterns abound.

The vast majority of the work in the two-floor exhibition belonged to Fairey’s on-going “Obey Giant“ project, done in service of one goal: to create a complex art-you-live aesthetic that changes the way audiences look at the rest of the world. Lofty stuff… yet, I could never shake the suspicion that there was far less going on intellectually than Fairey would have us believe. 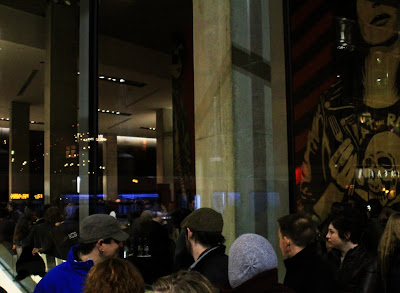 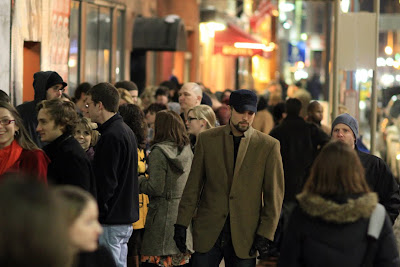 Crowds outside the CAC for the Shepard Fairey opening night party – photos by Jeremy Mosher.

Premised on a head-scratching concept — that a sticker of Andre the Giant that doesn’t appear to sell anything will make the public question the images around them — Fairey has subsequently cited existential philosophy (in this case, Phenomenology) as the underpinning of his work, essentially evading explanation instead of offering clarification. As with Lost, rather than resolving tenuous connections between images or occurrences, we’re told to just keep digging deeper and deeper down the rabbit hole: the truth is there, have faith. What truth? And why not share it here? For that matter, when is Shepard Fairey? Well, you got me. But, if the meaning of a statement is elusive, it doesn’t necessarily make the statement meaningful.

No, by invoking the terms “propaganda” and “dissent,” by using an Orwellian poli-speak in posters and incorporating an ever-widening range of historical and philosophical allusions, the Fairey retrospective merely trades in Big Ideas without really committing to any. It’s all sizzle, and the promise that maybe there is a steak in there if you look hard enough and can talk yourself into it. Ultimately, the work on display is far less nuanced than the politically- or commercially-charged imagery Fairey wants to call into question: neither as sneaky nor as clever as proper propaganda. “In lesser gods we trust?” Puke. 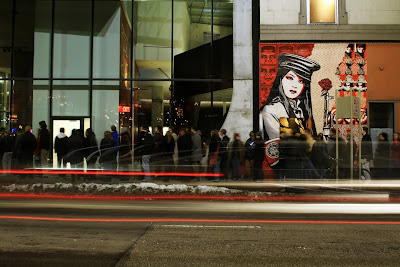 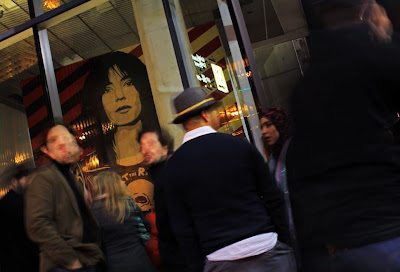 The line to get into the CAC wrapped around the block along Walnut Street – photos by Jeremy Mosher.

Still, if Fairey’s work is reductive and far less subversive than it aims to be, it remains extremely topical, and I’m thrilled to see the CAC book such a timely and interesting show: it’s the artist like Fairey that can move the arts into the fore of a city’s consciousness. Afforded the chance to see these much-talked-about, widely-popular works from our own day, I can’t recommend strongly enough that Cincinnatians take a visit to see what all the fuss is about.

But once you’re there… don’t believe the hype. If you look too hard for a satisfying explanation for the island, the jumps through time, and whatever else happened after I gave up on a game that couldn’t be bothered to come up with any set rules, you might just make your head hurt.