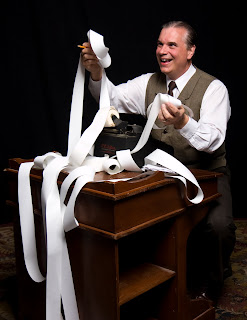 The Know Theater of Cincinnati’s third production of the 2009-2010 season, Add1ng Mach1ne: A Mus1cal opened Saturday to a sold out crowd. A re-imagination of Elmer Rice’s 1923 play, the musical makes tremendous use of the theater’s unique space by placing the audience on three sides of the stage, allowing the actors to freely roam the aisles, and situating the ensemble behind the stage but within view.

Slowly building into a melodic cacophony of numbers, the musical’s first piece immediately grabs the audience’s attention with its monotonous and hypnotizing trance. Playing off the theme of repetition, the musical captures the banality of Mr. Zero (played by Robert Pavlovich), whose only excitement comes in the form of the temptation of a beautiful young co worker (played by Liz Vosmeier).

After brilliantly depicting the essence of Mr. Zero’s mundane employment, the musical explores themes of appearance and superficiality, technology and obsolesce, predictability and sudden change, and crime and justice.

Add1ng Mach1ne runs through March 6. Tickets are only $12 for each show this season thanks to the generosity of the Carol Ann and Ralph V. Haile, Jr. US Bank Foundation. Tickets can be purchased online, or by calling the Know Theatre box office at (513) 300-5669.

Before the show, grab a drink with friends at the theater’s great bar, or visit Senate which opens Friday, February 19! Parking around the Know Theater (map) is abundant, but several bus lines eliminate the need to drive entirely. Check out Metro’s trip planner, and input “.