The trend of mobile food is nothing new, but it is still emerging in Cincinnati. Cafe de Wheels, the region’s first independent food truck, is expected to hit the road soon to start serving up delectable treats to Cincinnati’s hungry street people.

Cafe de Wheels is the brainchild of Tom Acito, and with a little help from Chef Michael Katz, it will be making its way around Cincinnati streets starting in the very near future. Focusing on burgers, fries, and Cuban sandwiches these two are looking forward to changing the way Cincinnatians enjoy their food. In speaking with owner Tom Acito about his choice to do a mobile restaurant versus a more traditional standalone storefront, he said there really was no choice at all.

From a cost perspective, he estimates that the start-up costs to open a traditional spot would run about $300,000 whereas the Cafe de Wheels truck was purchased and equipped for about $50,000. Another big benefit is that of course, he is mobile which will allow the restaurant to move with the crowd and also pick and choose when and how they invest their time. As things get started it will be just Tom and Mike so they don’t foresee staying out too late, at least initially.

“We’re pretty much just held to the same rules and regulations as a standard place without the associated costs of such an establishment,” said Acito.

Cafe de Wheels benefits from minimal logistics involved with operation the food truck. Outside of the required food vendor’s license, a peddler’s license, and tags for the truck, Acito and Katz say that not much was needed.

Acito said that Cincinnatians can expect to see them popping up around town wherever the local police force will allow, like valid on-street parking spaces. According to Acito, in the heart of Downtown they must stay off the street and use private lots where they have reached agreements with the owner of said lot.

When asked how these two men came together, Tom mentioned he had put a help wanted ad on Craigslist and Michael was one of many people to respond. Tom said that Mike just understood more than most, what Tom wanted to accomplish, and was really excited about the concept. 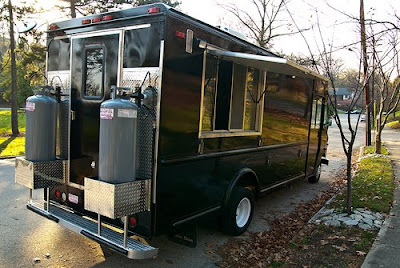 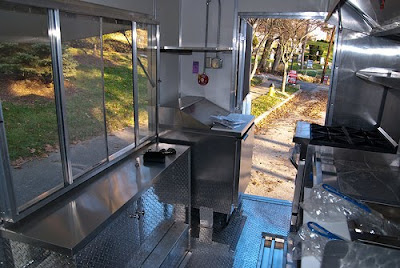 While Tom has not lived in Cincinnati his entire life, Mike has. He went through culinary school at Cincinnati State (then Cincinnati Technical College) and has worked in many kitchens around the city at various restaurants. His enthusiasm for the project shined through in our meeting. Cafe de Wheels is “back to the basics” as their focus is hamburgers and fries, but Mike plans on making it a bit more fancy with special sauces and other unique sandwiches like Cubans and his own veggie burger creations.

While there are other mobile food trucks in the process of starting up around Cincinnati, Café de Wheels is the first of its kind in that there is no restaurant backing it. The plans are to use as many local suppliers as possible to outfit the pantry and fill the fridge including Avril-Bleh Meats, Shadeau Breads, and even Dojo Gelato to accompany the warm fruit crisp dessert.

When asked if success could lead to a restaurant later on, Tom said, “That’s always been a dream of mine and this may be the first step, but for now we are really excited to get Cafe de Wheels out on the road.”

Follow Cafe de Wheels on Twitter @burgerBgood to stay up-to-date on their whereabouts, what they’re serving and all the latest news surrounding the mobile food craze in Cincinnati.