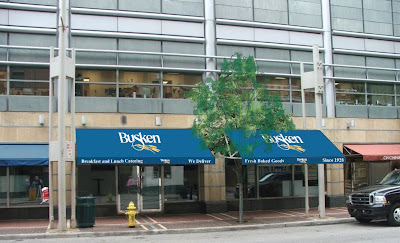 “We’ve had a retail presence in downtown Cincinnati for nearly 40 years,” said Page Busken, Chairman of Busken Bakery. “We’ve experienced the entire business spectrum of great success and miserable failure in the downtown market over the years. This will be the 5th time we’ve opened a new store in downtown Cincinnati and believe me, we’ve seen it all!”

Busken’s sons Dan and Brian encouraged their father to maintain a downtown location even when times were bad, and now that Cincinnati’s center city is experiencing a dramatic revitalization, the sons believe it would be foolish to leave.

“There is too much positive momentum and our city center is slowly but surely becoming a destination,” said Brian Busken.

The new store will look to grow their breakfast and lunch catering business which had previously been operated out of their store at 9th and Central near City Hall which has now been closed and replaced by the new store. The new store will also give Busken a presence in the heart of the bustling Backstage Entertainment District and within the close reach of thousands of downtown office workers and residents.

“Breakfast catering is something we are very good at, and to my knowledge I don’t know of any other bakeries that will deliver Hall of Fame Donuts, Danish Muffins, and gallons of premium coffee to any downtown business meeting or event, 5 days a week,” said Busken.

The new Busken Bakery at 7th & Walnut streets (map) is open Monday through Friday from 6:30am to 3pm, Saturday from 7:30am to 1pm, and is closed on Sundays. Bicycle and automobile parking are available, and the new bakery is located along several prominent bus routes and is located just two short blocks from Metro’s Government Square bus hub (plan your trip now).