2009 was a year full of progress for preservation advocates in Cincinnati. Several important structures were saved from the wrecking ball, new public policy is being implemented to help prevent additional demolitions, and Cincinnati’s historic neighborhoods reaped the many benefits of restoration investment.

This year the Cincinnati Preservation Association (CPA) has recognized six different individuals, organizations, and projects that represent “outstanding accomplishment in local preservation.” The awards included a new award for Special Recognition that went to the Meiner Flats building in Over-the-Rhine.

Meiner Flats was built in 1875 by a family of German-American stonemasons and is one of the tallest buildings in historic Over-the-Rhine. After sitting vacant for roughly two decades the building was ordered to be demolished by the City. The Special Recognition award was presented to Danny Klingler, among others, who helped bring attention to the building and save it from the wrecking ball thanks to generous donations from Cincinnatians, 3CDC, and the City of Cincinnati. 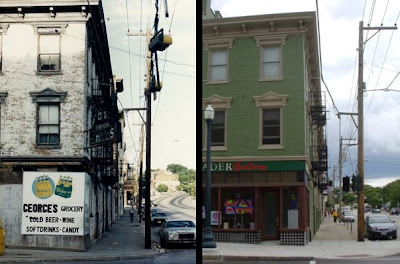 [Above] 13th & Republic in OTR’s Gateway Quarter. [Below] Rader Gallery building at Liberty and Main streets in OTR. Photos provided by Mike Stehlin.

Rookwood Pottery took home the Craftsmanship Award for restoring the proud Rookwood tradition which includes the first female-led manufacturing firm in the country, the best-known art pottery in the U.S., and one of Cincinnati’s most famous companies that was started back in 1880. In 2006 new ownership acquired all of the remaining assets of the original Rookwood Pottery and has moved into a massive 100,000 square-foot structure in Over-the-Rhine near Findlay Market.

Other awards handed out by CPA include the following: