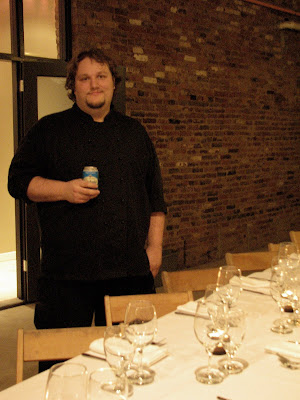 Local chef Josh Campbell (shown right) and his team at the World Food Bar Restaurant Group have been working their tails off this year. Not only has the group successfully been running the World Food Bar in historic Findlay Market since this June, but they also recently opened the restaurant Mayberry in downtown Cincinnati to much acclaim across the board. Juggling two businesses would be enough to keep anyone’s plate full, but the World Food Bar team has one more item on their menu.

Every month since August, Chef Josh has hosted a special dinner, complete with a theme and each time held in a different location . The location is kept a secret until the day of the event, but the upcoming menu isn’t. Previous events have included “Pinot and Pig” and a tribute to the late chef James Beard. Their most recent event, entitled “Thanksbrewing” – included custom-brewed beers by local brewer Greg Wilson that stood out on their own, yet matched the courses perfectly.

Thanksbrewing was held in the former Kaldi’s coffee shop space on Main Street in Over-the-Rhine. One long table set with sparkling dishes echoed the communal, family-dinner style feel that surrounded this experience. 33 people from all over Cincinnati came together to enjoy Chef Josh’s creations, try exciting dishes, and meet new people. The dishes did not disappoint, and it was nice to have delicious and interesting plates for both the meat eaters and vegetarians in the group.

I am by no means a food critic, but this meal was fantastic. However, my favorite part of dinner was being surrounded by 32 incredibly interesting and entertaining people. I not only ate with old friends, but met new acquaintances and had fantastic conversation over a shared meal. The feeling of a full belly combined with newly forged friendships was pretty hard to beat. 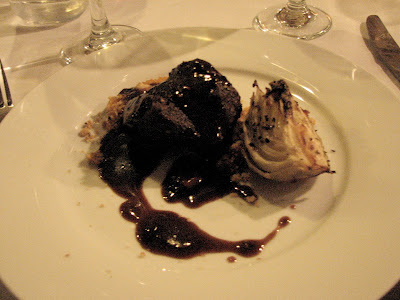 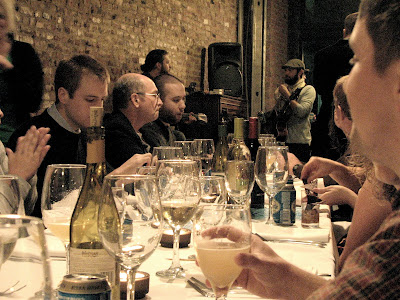 If you’re feeling bummed that you missed out on Duck Confit Nachos or a Lambic Raspberry Beer “float” (with chocolate ice cream and peanut butter cupcake!), don’t fret. The dinners will keep rolling on into the new year, with new places, menu items and themes. Micah Paldino, a public relations manager for World Food Bar, states that February’s dinner is looking to be a “White Trash” Valentine’s Day, with prices around $30 a person.

If you’re looking for a completely unique eating experience with amazing food and fantastic people, start following World Food Bar on Twitter or check out their Facebook Fan Page to keep up on all the upcoming details. And if you can’t wait until February, be sure and stop by World Food Bar at Findlay Market or Mayberry in downtown Cincinnati.

Disclaimer: I’m not a food blogger, and certainly am not a professional critic, but the folks at World Food Bar were kind enough to allow me to come to Thanksbrewing for free. However, UrbanCincy writer Dave Rolfes was also in attendance, and he paid his way fair and square. No biased opinions here.