It took less than one hour for the complaints to start rolling in about the new ramp meters along Cincinnati’s Interstate 74. Morning commuters complained that the meters were actually making congestion worse and that the slow downs were pushed onto the ramps and surrounding neighborhood streets leading to the interstate.

What many of these commuters probably do not realize is that ramp meters actually do not reduce congestion directly. Instead they diffuse congestion and reduce conflict points for drivers by eliminating much of the lane-to-lane merging that occurs around heavy on-ramp points.

The idea is simple, instead of having a slew of cars come rushing onto the interstate all at once, the ramp meters spread that surge out with a managed traffic flow. But what this does do is push congestion back off of the interstate onto the ramps and surrounding streets. That is unless other indirect things take place. 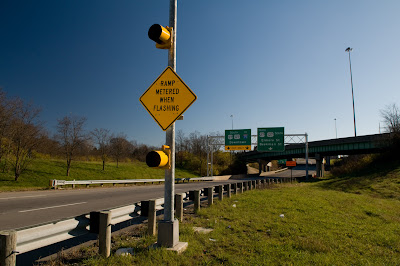 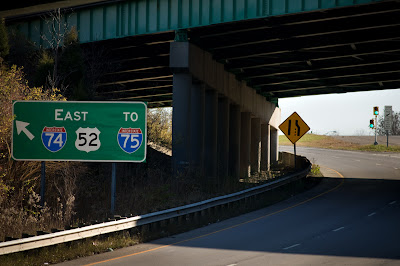 Ramp meters at Colerain Avenue along I-74 – photos taken by Jake Mecklenborg.

Improved traffic flow can improve capacity issues on interstates and thus reduce congestion. Well-timed and managed traffic systems surrounding interstate on-ramps that include these meters can also help avoid bottlenecks on neighborhood streets. But ultimately ramp meters do not reduce congestion for the simple reason that they do not add capacity or reduce volume.

The best way to reduce congestion along I-74, or any interstate, is to build additional capacity that does not strain the existing system. What this means is that simply adding a lane or two won’t do the trick, but adding a commuter light rail line will.

In Atlanta, the infamous “Downtown Connector” includes both I-75 and I-85 traffic and is currently in the process of being widened AGAIN. It too includes these ramp meters to manage traffic flow. Once the widening project is completed the stretch of interstate, appropriately compared to the Ohio River of Atlanta by the Carter/Dawson development team of The Banks, will boast some 24 lanes of automobile traffic including the intricate system of parallel ramps. The interstate still suffers from daily gridlock every day even with this monstrous automobile capacity because the same system is being strained to handle additional capacity while no new capacity is added to the overall transport network. 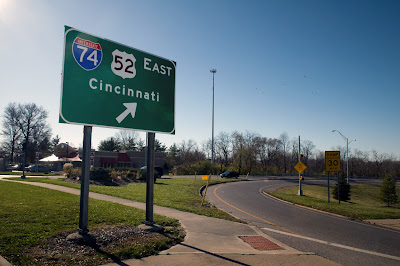 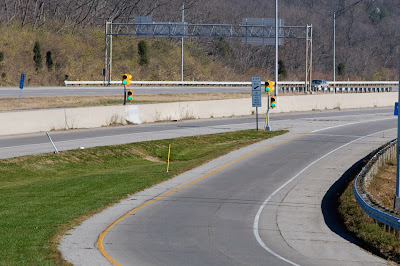 Ramp meters at North Bend Road along I-74 – photos taken by Jake Mecklenborg.

In Cincinnati, I-75 is being widened in most places throughout Hamilton County to 4 or 5 driving lanes not including ramps, and will also include these ramp meters at virtually every on-ramp location. With these improvements it has been identified that this stretch of interstate through Hamilton County will go from a “D” rated highway to a, wait for it, “D” rated highway once complete.

We are pouring billions of dollars into these interstate improvements and seeing little to no improvements in safety or congestion. A well-integrated commuter rail system that compliments our existing interstate and road networks is a much more effective way to manage traffic congestion. Such a system would provide additional capacity and options for commuters as they move from our region’s residential sectors to our region’s job centers.

So when you are enjoying that rush hour commute next time try to avoid letting the stress build up inside as you sit in the frustrating stop-and-go traffic. Instead be thinking about how the Cincinnati region could have been opening the first of 7 commuter light rail lines, two streetcar networks, and a completely revamped bus system had the 2002 Metro Moves plan passed. But instead of a long-term investment and solution we are stuck with temporary fixes that are wasting our tax dollars.