Once in a generation does a city get an opportunity as great as what Cincinnati has before it right now with the redesign of Intestate 75. In the mid-Twentieth Century the interstate ripped through some of Cincinnati’s most densely populated neighborhoods and has permanently cut those urban communities off from one another. When I-75 was built it even destroyed the character of the famous Crosley Field when it ripped through the West End beyond the outfield walls and quickly turned the urban neighborhood into an auto-dependent no-man’s land that left the ballpark isolated. 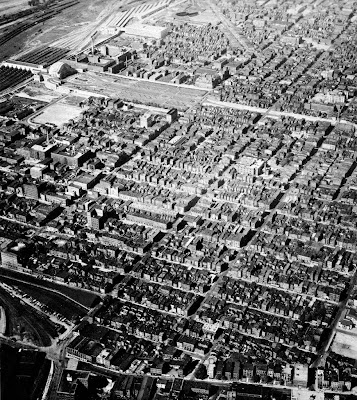 Today, city leaders and urban designers have a chance to finally heal those 50-year-old wounds that are still evident throughout Cincinnati’s West End, Camp Washington, Northside, Queensgate, and western Central Business District. In order to take advantage of this opportunity, Cincinnati City Councilmember Roxanne Qualls has pushed for a comprehensive look at the corridor which has led to the selection of Urban Design Associates (UDA) to develop a plan that will energize and improve the quality of life in the study areas. 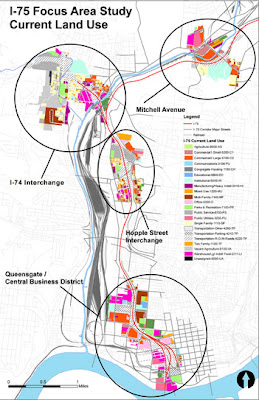 “It is important to recognize the opportunity to connect and reconnect the neighborhoods and their assets relative to Interstate 75,” said Charles Graves, Director, Department of City Planning. “By linking the neighborhoods to the interstate, the City of Cincinnati will be able to capitalize on new opportunities and strengthen existing assets.”

The Revive I-75 Cincinnati Focus Area Plans will look to do just this by working with neighborhood leaders on urban design plans that will focus on New Urbanist techniques and attempt to return the neighborhoods to the form they were originally built. In order to accomplish this Pittsburgh-based UDA will rely on heavy public involvement, through a series of public meetings, to get the best understanding for the urban spaces and neighborhoods they are dealing with.

The first of such meetings will take place on Thursday, November 12 from 6pm to 8pm at Cincinnati State (map) in the Advanced Technology & Learning Center Auditorium on the second floor. Parking will be available in the Central Parkway Garage on campus, and Metro bus service is also available. Plan your trip now using Metro’s Trip Planner.

If you’re unable to attend the meeting, and would still like to share your thoughts, then please call the Department of City Planning at (513) 352-4845 or email info@reviveI-75cincinnati.com.