What do you get when you combine 3 fantastic actors, football, cooking shows, rapping, juggling and too many wigs for one bald man to pull off?

Obviously a stellar performance of all the works of one of the greatest playwrights the world has ever known. That is, The COMPLETE Works of William Shakespeare (Abridged), a ‘feat unprecedented in theater’, which is opening tonight at the Falcon Theater in Newport, Kentucky.

Even if you can’t tell your Romeo from your Juliet, you will have a fantastic time watching Thurman Allen, Chris Smyth and Jan Dallas Benson bring a touch of modernity to the classic works of Mr. S. It thankfully does not take a Shakespeare scholar to understand and appreciate the play, and with any luck you’ll end up learning a little along the way. At any rate, throw any preconceptions you may have about Shakespeare being boring out the window. This is Shakespeare on psuedophedrine (if you watched this past week’s episode of Glee, you’ll know what I’m talking about). 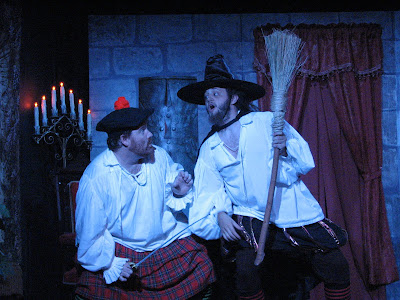 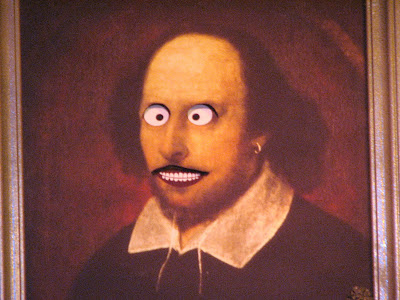 The Falcon Theater is celebrating its 20th year of producing quality semi-professional theater by reviving another run of its best loved shows. Shakespeare Abridged made its original debut in the 1998-1999 season. Ten years later it is back… and we’re glad.

The three actors together play all the various characters in the 37 plays. There’s a lot of props and costumes that really help to illustrate their various points and bring life to the different roles (however briefly they may appear on stage). Thurman Allen plays the ‘intellectual’, often lapsing into monologue. Jay Dallas Bennison switches into falsetto and plays the heroines with aplomb, and Chris Smyth is the one attempting to hold them all together so the show will go on. This trio has an impeccable sense of comedic timing, and play off each other very well. The show moved along at an appropriately quick pace, and the actors rolled with the punches of the blogging audience and added some hilarious improvisation to their act. 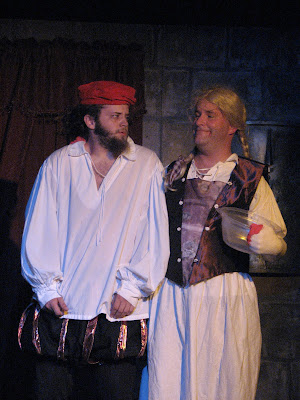 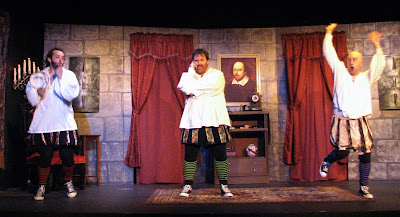 The other fun part about Shakespeare, Abridged is its element of audience participation. Without divulging too much, it’s safe to say that you will be diving into the minds of Shakespeare’s characters and helping to contribute to the show in some way shape or form. The improv aspect not only removes the “wall” between audience and actor, but it basically throws it completely out the window. With any luck, you might end up like this hapless blogger shown below: 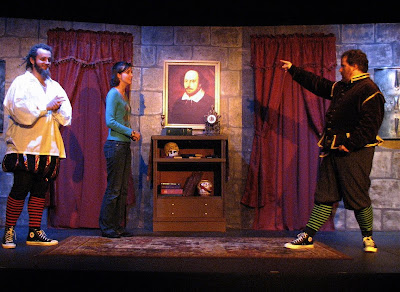 The Complete Works of William Shakespeare, Abridged runs the next three weekends on Fridays and Saturdays, October 9, 10, 16, 17, 23, 24 at 8pm. Tickets are $15 for adults and $12 for students and seniors. You can order your tickets online here. The Falcon Theater is located at 636 Monmouth Street in Newport, KY (approximately 4 blocks south of the Levy).