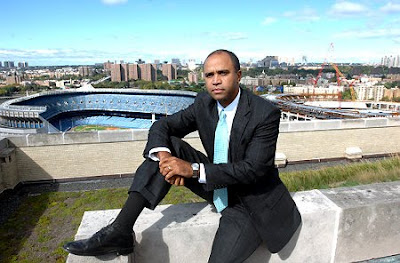 A few weeks back, I wrote about the newly formed White House Office of Urban Affairs (OUA), which seeks to be more mindful of the impact federal policies have on metropolitan areas. As a way to better our metropolitan areas, the director of OUA has begin a several month-long tour of American cities.

Director Carrion’s focus recently has centered on cities’ efficiencies and therefore their natural ability to serve as the catalyst for a new, environmentally conscious economy. Director Carrion spent Tuesday in Kansas City meeting with “Special Assistant to the President on Urban Policy Derek Douglas, Special Adviser for Green Jobs Van Jones, … HUD Secretary Shaun Donovan, Transportation Deputy Secretary John Porcari [and] … local elected officials, stakeholders, and community members to discuss the development of the Green Impact Zone, an initiative which is using federal and local resources to invest in components of sustainable living and to create jobs in one of the city’s most challenged communities.”

The Director will be touring the nation holding similar meeting and seeking input to shape his policies. The fact that his first of such meetings focused on the potential for cities to act as an incubator for the green economy demonstrates Carrion’s willingness to research new, innovative ideas. As a result, the director’s policies will favor those cities that best implement best practices and innovative techniques.

Cincinnati needs to be on this list of innovative cities. There is no reason that our manufacturing past cannot resurrect itself to be the leader in inventive technology. One way to ensure that Cincinnati stands up and is counted among the cities that does not want to be left behind is to send a loud, clear message that we want to be involved. The White House encourages Americans to request that Director Carrion stop in their city to discuss their issues with him.

We ought to take the White House up on this offer. Please send a clear message to the Obama Administration that Cincinnati is a force to be reckoned with by emailing urbanaffairs@who.eop.gov. When you do, respectfully request that Director Carrion come to Cincinnati, and mention whatever urban issues you think are most pressing. When I wrote I motioned that Cincinnati’s once-booming manufacturing infrastructure currently lays under-utilized, so we need policies to encourage business development in the US. I also said that the gorgeous and historic architecture of this city is undervalued and under-appreciated, which accelerates its demise, so we need policy that encourages restoration and infill as opposed to demolition and new building. Finally, I praised the administration for taking a firm stance on high speed rail, and pled for a set of comprehensive, fair and practical transportation policies that encourage competition instead of an auto-centric monopoly.

If you have a moment, please write a few sentences on why Cincinnati needs to host the Director of Urban Affairs, and send it to urbanaffairs@who.eop.gov. It is vital for the future of this city that the voices of Cincinnatians be heard as they are crafting policy.