This weekend, both sides of the Ohio Riverbanks were bustling with festivals. The Black Family Reunion was happening on the Ohio side of the river, and the Great Inland Seafood Festival was happening on the Kentucky side. Having visited the Black Family Reunion festivities before, a visit to see what the KY side of the river had to offer seemed in order.

That being said, I was impressed that the vendors had such a varied amount of foods available. From the lobster rolls, to the coconut shrimp and the seafood medley, the spread had something for everyone. There were about 15 seafood vendors there, and all had multiple iterations of seafood available. I expected there to be Cajun food available, but was surprised to see not one but two Greek seafood vendors (I think from the same family).

There were other non-food booths there – folks selling sunglasses, a Skoal booth, and another tent had jewelry and knit items along with ice cream and sno-cones and of course there was plenty of alcohol for those who wanted it. There was also a music stage, and music was planned for much of the festival by a variety of acts including a Beatles cover band. 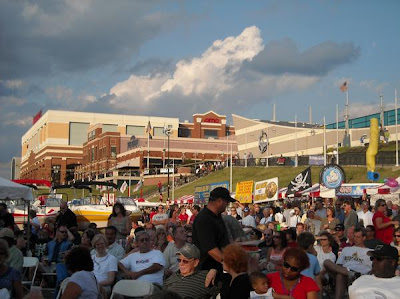 When we showed up, it was towards the end of the night, and as the heat was dying, people were coming out to partake in the food. They had 1-pound lobsters for sale for $10.95, but (unsurprisingly) they sold out Saturday afternoon. The vendors really seemed to enjoy interacting with the crowds, and their booths all were decorated in a whimsical manner (pirate’s flags, giant fish on the signs, etc.). Maybe I don’t dabble in seafood nearly enough, but we did not see local vendors that we recognized other than Bella Luna. I’m not sure why Washington Platform, Bonefish or even Mitchell’s were not there, but my only guess could be that the extra expense would not be worth it to them financially.

Before coming out, I checked the local papers (City Beat, Metromix, KY Enquirer), and from what I could see there were no print ads for the festival, just mentions in the weekend calendars of events. Beyond those papers, I really didn’t see much advertising for this festival, which may have been due to the economy. Unfortunately, by the time we arrived the “Newport Ambassadors” had been sent home, so we really couldn’t get much info from them about the history of the festival.

Some of the long-time vendors there told me that the crowds were smaller this year, but that could have been due to multiple reasons. From what we were told, in the past it was tied to a boat festival on the Ohio River, and last year turn out was very good. However, the boat show was cancelled this year due to the economy, and it’s anyone’s guess as to if it will come back at all. If that’s the case, my vote would be to move this to either late spring or early fall – for me, the thought of buying fresh seafood in 90 degree heat just doesn’t appeal, and I LOVE seafood! Personally, I don’t understand the reasoning behind having a festival like the Great Inland Seafood Festival during the hottest month of the year.

As festivals go, this one was definitely a different one than many of the festivals we have during the summer. While the programming around it was pretty nominal (aside from live music), it definitely had a more relaxed feel than the Taste of Cincy and most of the other events in the downtown Cincinnati/riverbanks area. I feel like the folks there are the same kind who go to Jimmy Buffet concerts – real laid back and looking to have a good time. Maybe one visit is enough for some, but if anything go at least once for the fun vendors and atmosphere!

Tip if you go next year: If you go, you’ll pay at least 5$ for parking down by JB Fink’s. Since we biked, we didn’t have to deal with that added expense. If you were to drive to this, I’d advise going to park at the Levee (where it’s cheaper), and spending some time there either before or after the festival to make it worthwhile. Since this festival is a bit smaller than others, you could probably walk around, eat some food and leave probably within 1-2hrs if you don’t want to stay for music.