The Ohio Department of Transportation (ODOT) and the Ohio Rail Development Commission (ORDC) last week announced that they have jointly developed a website called 3CisMe, which will serve as the main hub for information surrounding Ohio’s proposed 3C (Cincinnati, Columbus, Cleveland) rail corridor. Although the name of the site is admittedly lame, the site itself is quite useful.

3CisMe is meant to both inform the public as to the progress of Ohio’s 3C rail line and serve as a sounding board for critics and boosters alike. In addition to being one way that the ODOT and ORDC will disseminate information on the progress of the project, a “public comment” section will allow citizens an opportunity for their voices to be heard. Some of those comments will even be featured in the application for funding through the American Recovery and Reinvestment Act (better know as the Stimulus Package). Ohio must turn in its application by October 1. 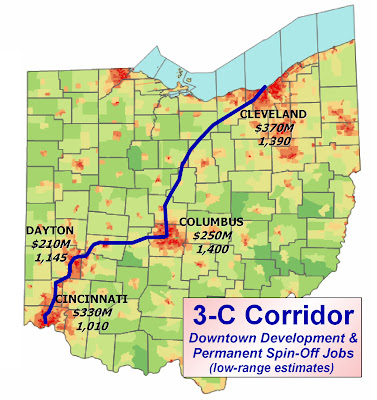 The current 3C proposal would allow travelers to travel between Cincinnati, Dayton, Columbus, Cleveland, and Toledo, collectively home to 60% of the state’s population. With stimulus funding, Ohio’s “quick-start” plan would be operational by 2011.

This system will link in with a larger mid-west network, servicing Chicago, Milwaukee, St. Louis, Indianapolis, Louisville, Omaha, and Kansas City. The Chicago Network Hub would serve as the gateway to the west. The 3C corridor is well suited to link with the Keystone corridor, a network of rail lines servicing New York, DC, Baltimore, Philadelphia, Pittsburgh, and the rest of the east coast. 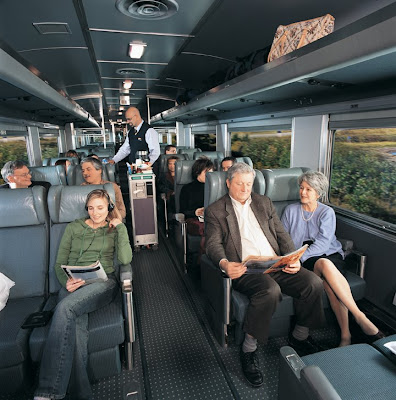 A March 2009 Quinnipiac University Poll showed that nearly two thirds of Ohioans favored re-establishing passenger rail in the 3C Corridor. Some want to see it happen because they know the economic development potential it creates, while others think the 3C corridor would be useful because they don’t want to put the mileage on their car, or they don’t have a car at all. While some want to travel by train because it is more relaxing than traveling by car or plane, others like the idea because it will allow them to be more productive, like this commenter from the site:

“Several times per year, I have to travel to Columbus for meetings and training. Whenever I go now, I lose at least 5 hours of productivity per trip. On the train, I could use a laptop to keep up with my e-mail, tend to paperwork, have telephone conferences, and sometimes even meetings with coworkers. These things can’t be done in a car.”

Just one parting thought: There is a proposed amendment to the Cincinnati City Charter that would require a vote each and every time the city wanted to invest in a new phase of planning or constructing passenger rail. If it passes in November, neither the State nor the Federal government would be able to count on Cincinnati as a stop on the system. The timeline on this project is one that will require cities and states to efficiently compile an application for funding. If Cincinnati cannot commit in a timely manner (and it would not be able to commit without going to another vote if this passes), the Federal dollars will go to one of the other 278 projects in 40 states that have already submitted pre-applications as of July 17.

Cincinnati would be offered another transportation choice with rail, but the city could easily be left out if the amendment passes. Passing the amendment would reduce travelers’ choices, and leave Cincinnati at a competitive economic disadvantage. For more information on the potential negative implication of the proposed amendment, please see the Cincinnatians for Progress web site. Though I disagree with them, for the other perspective on the amendment, please click here.

Note: to visit the 3CisMe site directly, go to http://3cisme.ohio.gov/ and please note that it does not include the www in front like many sites. Source for this post.